No explanation was given by the BCCI as to why the sudden decision was taken up.

In what may well be a blow to cricket fans in Rajasthan, it has been decided by the Board of Control for Cricket in India (BCCI) authorities that Rajasthan Royals (RR) will play all of their ‘home’ games in Ahmedabad in the second leg of the Indian Premier League (IPL) 7 which will be hosted in India.

The decision comes as a surprise considering the massive fan base that the Raj Kundra and Shilpa Shetty owned franchise boast of in their home state and will definitely not go down well with both the players as well as the owners, reports IndianExpress.

The main reason for Rajasthan’s home games being shifted to Gujarat may well be due to the onset of general elections in the state which coincides with the start of the first-leg of the IPL in United Arab Emirates (UAE) on April 17.

The eight IPL franchises will play a total of nine games in India during the second-leg, with five of them playing four of those games in their respective home grounds.

“It is great news that the fans back home in India will be able to watch a large part of the Pepsi IPL 2014. Given the various challenges and the logistical complexities, we have spent a considerable amount of time in crafting a balanced schedule,” said IPL’s head of operations Sunil Gavaskar.

Though Gavaskar confirmed that Rajasthan’s games have been shifted off to Gujarat, still no explanation was given as to why the sudden decision was taken up.

“Depriving Rajasthan games of a Team called Rajasthan Royals — born and bred in Rajasthan is just Pure Malice and stupid. Happy to see Ahembdabad get it’s much due matches – better would have been to split the games as I did in Year 3,” tweeted former commissioner Lalit Modi.

Depriving Rajasthan games of a Team called Rajasthan Royals – born and bred in Rajasthan is just Pure Malice and stupid.

Another reason doing the rounds is that of the ongoing legal wrangle between the BCCI and the Rajasthan Cricket Association (RCA) in the Supreme Court which may just be the reason for the shifting of the venue.;

Interestingly the bone of contention is for both parties is Modi who contested the elections for the RCA despite receiving a life-ban from the BCCI and may well have a huge part to play in the ongoing saga.

“RCA doesn’t have any office-bearers. The matter is still in court. Franchisees work hand in hand with state associations but the case here is different,” said a BCCI official.

On the other hand Modi lashed out at IPL chief operation officer Sundar Raman and lambasted him on twitter by saying, “Does @ramansundar and his gang thugs think by taking away matches from JAIPUR – they will earn brownie points. Sundar watch out U R NEXT. Fixers in IPL Management who still trying to fix things. Believe me your fixing days are limited. U should know by now WE will go after u. So @ramansundar get out of your fixing mode. Try and do the right thing that u were used to doing when I hired u, before it’s too late.” 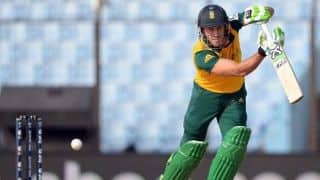