Ajinkya Rahane was unbeaten on 76 from 55 balls against CSK.

Rahane was unbeaten on 76 from 55 balls as he caressed the Chennai Super Kings (CSK) bowlers with ease to the ropes in an Indian Premier League (IPL) encounter at the Sardar Patel Stadium and help his side overhaul the target of 156 for the loss of four wickets with eight wickets and 10 balls to spare. Full Scorecard: Kings XI Punjab (KXIP) vs Kolkata Knight Riders (KKR) IPL 2015 Match 14

“I was enjoying my batting. It’s a funny game, you should try and b at really well till you are in this kind of form,” Rahane said at the post-match presentation ceremony. Indian Premier League (IPL) 2015: Complete coverage

Speaking on his skipper and opening partner Australian all-rounder Shane Watson, who blasted a 47 ball 73, he said: “Opening with Watson is a pleasure. He dominates the opposition, I was just trying to give the strike to him.”

The 26-year-old added he likes keeping things simple out in the middle and he likes playing the role of a sheet anchor.

“I like to keep my batting simple. Getting runs in the first 6 overs is important, but then my job is to anchor the innings,” he said. 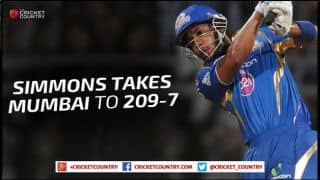