IPL 2015: Deepak Hooda emphasises on concentrating on ball rather than bowler

IPL 2015: Deepak Hooda emphasises on concentrating on ball rather than bowler

Hooda played an important role with the bat, smashing 30 off 15 balls.

Rajasthan Royals (RR) middle-order batsman Deepak Hooda stated that his only aim during his whirlwind innings of 30 off 15 balls, was to hit the ball if it came within range of the willow during their opening game of the eighth edition of the Indian Premier League (IPL) against Kings XI Punjab (KXIP) at the MCA International Stadium in Pune. Read: Rajasthan Royals vs Kings XI Punjab match report

Hooda, who hit three sixes and a four, added 51 runs for the sixth wicket off 38 deliveries to help his team finish on a challenging total of 162 for seven from 75 for five, before restricting KXIP to 136 for eight to win by 26 runs.  FULL SCORECARD: Kings XI Punjab (KXIP) vs Rajasthan Royals (RR) in IPL 2015 Match 3

“The only thing we were talking about was that if the ball is in our range then we will hit it. If not then we (decided that we) will take ones and twos and keep rotating the strike. So I kept playing my normal game. So what I thought was in my range, I hit it,” said Hooda was quoted in an interview on iplt20.com.  Read: KXIP skipper George Bailey blames batting changes for loss

“See the ball not the bowler,” was what Hooda emphasised on later in the interview.

Hooda, who plays for Baroda in the Ranji Trophy, added that he was nervous when he walked out to bat, but walked away with a positive change in attitude. IPL 2015: Points Table and Team Standings

“Positive attitude [is his takeaway] and now I will not get nervous. When I went in to bat I was nervous a bit. [Mitchell] Johnson was bowling, but then [later on] I was okay,” added Hooda. IPL 2015: Schedule with venue details

James Faulkner was awarded the Man of the Match award for his 33-ball knock of 46 as well as figures of three for 26, as Rajasthan started their IPL eight campaign on a winning note.  IPL 2015: Complete Coverage 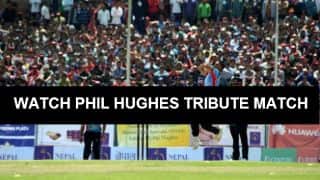