Mumbai Indians have lost all of their matches till now and are presently at the last rung of the table.

Mumbai: Off to a poor start in the Indian Premier League (IPL) 2015 with three defeats on the trot, former champions Mumbai Indians (MI) are a bit low in confidence, conceded team captain Rohit Sharma and head coach Ricky Ponting at Mumbai on Wednesday.

“I know we have lost three games. We have not been doing some things well. We are working on them. We are unable to cross one hurdle that we have to cross and something is lacking in batting or bowling. Its a matter of confidence. We have to give the boys the confidence,” said Sharma on the sidelines of the MI-Reliance Foundation’s Education For All’ initiative for underprivileged children. IPL 2015: Schedule with venue details

“As a group we are lacking a little bit in confidence at the moment. We have not got off to a great start so far in the tournament. Looking at the last couple of games we played some really good cricket. We have to make sure we do that for the entire 40 overs and not only for 25 or 30 overs as we have been doing,” said Ponting. IPL 2015: Points Table and Team Standings

Mumbai have lost two away games to defending champions Kolkata Knight Riders (KKR) and Rajasthan Royals (RR) and one home game to last year’s runners-up Kings XI Punjab (KXIP) and are presently at the last rung of the table, even below another winless team Delhi Daredevils (DD) because of an inferior net run-rate. IPL 2015: Complete Coverage

However, Sharma exuded confidence by observing that last year too – when the first half of the tournament was held in the UAE because of the general elections in the country – MI had bounced back after a horror run of five straight defeats to make the play-offs. IPL 2015: CSK, KKR, RCB, KXIP, MI, RR, SRH, DD full team details in IPL 8

“Our preparations are very good, but we are unable to execute our plans fully. Even last time we were in a similar situation and we came back well. We are next playing a home game against Chennai (Super Kings) (on April 17) which is an important game and we need to forget what has happened so far, take the positives and go forward,” said Sharma.

Echoing the captain’s optimism, former Australia captain Ponting too said a top drawer show from MI was on the cards.

“I have this feeling that a really good performance is round the corner. We have to make sure we work hard when we train tomorrow. We are playing a very good Chennai outfit in a couple of days time. We need to be at our absolute best to win that game,” said the two-time World Cup-winning captain.

Asked about going down to bat at number 4 in yesterday’s game against the Royals at Ahmedabad by abandoning his opening slot, Sharma said it was to maintain the team’s balance.

“The reason is pretty simple, just to get the right combination and the right balance in the squad,” said Sharma who had scored a brilliant 98 not out against KKR but then fell for two ducks in succession.

“Good to hear that. My congratulations to her,” he said when asked about tennis star Sania Mirza’s climb to the top of the world doubles rankings.

Meanwhile, MI’s Aaron Finch — who retired hurt for ten in yesterday’s game against the Royals apparently with a hamstring injury when going for a run — today went for a scan to find out the extent of the injury.

The Australian World Cup winning opener was absent when the others – along with team owner Nita Ambani – played ‘gully cricket’ with 50 children from 7 NGOs.

Last year under the EFA program, nine underprivileged children were flown to Dubai to be with the players and later one of MI’s home matches was dedicated for these children and saw over 18,000 of them seeing the game at the Wankhede Stadium.

“This year again, Mumbai Indians will reserve entire stadium on 25th April home match (against Sun Risers Hyderabad) for these kids. Around 28,000 kids are expected to come to the stadium,” informed a spokesperson of the team. 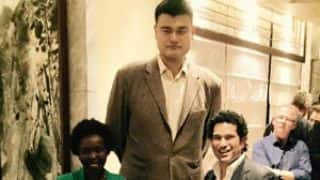