The MET office predicted high possibility of rain and thunderstorm for Tuesday.

Kolkata: There is a high possibility of rain and thunderstorm interrupting the opening ceremony of the Indian Premier League (IPL) at the Salt Lake Stadium in Kolkata on Tuesday, according to the Met office predictions.

Regional Meteorological Centre director G.C. Debnath said apart from showers, there is a high chance of a thunderstorm striking Kolkata and a surrounding 50-km area in the afternoon. Read: T20 fever returns with glamorous opening ceremony

“There is a high possibility of rain and thunderstorm around Kolkata and surrounding 50 km on Tuesday especially in the afternoon and evening. It is difficult to say if it will affect Salt Lake but chances are high,” Debnath said. Read: Copyright to organisers for music for opening ceremony

The weatherman’s forecast has already increased the creases on the foreheads of the organisers, who are particularly concerned about the smooth conduct of a light and laser show which is supposed to be the main attraction of the ceremony, in the event of the thunderstorm. Read: KKR denied practice due to thunderstorm

All eight team captains will be present at the function to take the Marylebone Cricket Club (MCC) Spirit of Cricket pledge.

Gautam Gambhir, captain of defending champions Kolkata Knight Riders (KKR), will put the trophy back in play, signalling the start of the 2015 season. 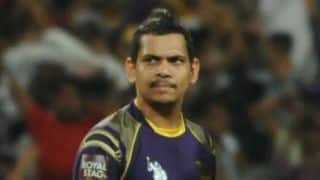