The ministry seems to be talking tough this time around because its permission is must to hold the IPL tournament in the country.

According to highly-placed sources in the ministry, the BCCI has been asked to share profits generated by IPL with the National Sports Development Fund (NSDF). The letter dated March 12, 2015 has already been sent to BCCI secretary Anurag Thakur with a note that “while granting No Objection Certificate (NOC) for IPL 2015, it was made clear to the board that it was required to contribute to the NSDF”. IPL 2015: CSK, KKR, RCB, KXIP, MI, RR, SRH, DD full team details in IPL 8

Though the exact amount of sharing is not specified, it is supposed to be based on either “percentage” or a “consolidated sum” of IPL profits. It may be recalled that the BCCI gave a consolidated sum of Rs 50 crore to the NSDF in 2008 for the development of Olympic disciplines in India. The ministry, however, kept writing to the board with a similar request in the following years but the cash-rich BCCI refused to part with any more share of profits in the subsequent years.

However, the ministry seems to be talking tough this time around because its permission is must to hold the IPL tournament in the country. For this reason only, when BCCI approached the ministry for the NOC for the ongoing season, it was made clear that the board will have to contribute to the sports fund.

It is a different matter that Thakur, being senior Member of Parliament from the ruling party, managed to get permission this time to host the IPL tournament after some political intervention. But he may find it tough next year as the ministry has been talking tough and might refuse to grant the NOC for next season till the time a contribution is made towards the NSDF.

According to a senior official, the BCCI isn’t happy with the withdrawal of tax exemption for matches it organises and non-availability of details on how the 2008 grant was utilised or disbursed among the athletes by the ministry. The BCCI had once approached the ministry with the request to share with them the break-up of expenditures, but the details were never made available to the board.

“Tax exemption is only applicable to such institution which has declared itself a charitable society. Various governmental agencies have declared that the character of the BCCI changed since June 1, 2006, when it amended its constitution to change its objectives and ceased to be a charitable organisation.

“The IT department had also passed an order sometime in 2010-11 terming the BCCI a commercial organisation and not a charitable one. Moreover, the authorities had also termed all income of the IPL as commercial since the T20 league began in 2008 and it involved the commercial marketing of the game. So, they can’t rake up this issue as an excuse for no contribution towards NSDF,” explained a senior ministry official on Monday.

Going by the ministry’s tough stand, this issue could well become a flashpoint between the two in the coming days which could well see IPL run into difficulties. IPL 2015: Complete Coverage 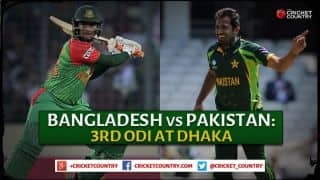 Bangladesh vs Pakistan 2015, 3rd ODI at Dhaka, Preview: In-form hosts all set for a 'Bangla-wash'