M Ashwin took 7 wickets in 10 matches for Rising Pune Supergiants (RPS) in IPL 2016 which proved to be a big learning curve for him.

Not many knew about leg-break bowler Murugan Ashwin, before IPL 2016 began. The 25-year old who hasn’t done a lot in the domestic circuit, having played just three First-class matches and two List-A matches, he had to prove his capabilities in the Syed Mushtaq Ali Trophy to stand any chance of selection by an IPL team. He took 10 wickets in 6 matches that he played in that tournament. Although, having had the opportunity to bowl in the Chennai Super Kings (CSK) nets in 2015 and being noticed by MS Dhoni and coach Stephen Fleming, he still had to prove his worth for Rising Pune Supergiants (RPS) after being bought for 4.5 crores in the auctions. ALSO READ: IPL 2016 Auction: Murugan Ashwin sold for Rs. 4.5 crores to Rising Pune Supergiants

He finished his first season of IPL by taking 7 wickets in the 10 matches that he played, before being ruled out due to side strain. When asked about his first stint in the Indian Premier League he said – “For a first IPL it was a good learning experience, and I think I did fairly well,” he says. “I didn’t think about the price I was bought for. From a team point of view, though, it would have been good had we qualified for the playoffs,” as quoted by espncricinfo.com.

Murugan, for whom it would have been a good learning experience having had the chance to play alongside the likes of MS Dhoni, Ajinkya Rahane and his more popular namesake Ravichandran Ashwin, felt he was used as a wicket-taker by his side in the IPL. “At practice, I was working on my variations and was planning which lines to bowl, which lines to bowl in the slog [overs]. I bowled in the Powerplay in one match, and I also bowled in the 18th over in another game. I felt they used me whenever they needed a wicket,” said M Ashwin. ALSO READ: IPL 2016: Ravichandran Ashwin, Murugan Ashwin on MS Dhoni, spin attack and the Tamil bond

But what M Ashwin would have treasured the most would have surely been the interactions and chats alongside, India’s best off-spin bowler at the moment (Ravichandran Ashwin). “This is the first time I had the opportunity to have a lot of conversation with him,” M Ashwin said. “We used to have breakfast together, and we would watch other games together during dinner. I was lucky to have actually watched the game with him, and discuss other teams – why a bowler was successful, what length and line he was bowling. We used to talk cricket like how people would normally discuss stuff over the dinner table,” he added.

R Ashwin surely might have shared one or two tricks out of the plenty that he has in store, as the younger Ashwin said – “He would also tell me about the preferred hitting areas of guys like Brendon McCullum and Dwayne Smith.”

M Ashwin who picked up his best figures of 3-36 in the IPL not only praised his spin partner R. Ashwin for the advices and help that he was offered, he also praised South African leg-spinner Imran Tahir who he felt was always ready to help youngsters. “During the Delhi Daredevils game I had a long chat with Imran Tahir, and I asked him how he bowls the flipper and the slider,” he says. “He is very generous. He doesn’t mind sharing his tricks. During the net session in Chennai he had asked me how I bowled my googly. He gave me feedback this time, saying he tried it and it didn’t work for him,” said Ashwin.

Meanwhile, M Ashwin was also thrashed for two big sixes in two consecutive of his by the strong Yusuf Pathan against the Kolkata Knight Riders (KKR) felt that sometimes you have to absorb pressure and still perform despite being hit. “He is a very strong player, and I knew I shouldn’t bowl there,” he says. “Execution comes with experience, but at this stage you have to absorb that pressure and perform,” said Ashwin.

But what might have been a really important learning curve for M Ashwin would have been the chance to play with the curent Indian ODI and T20 captain MS Dhoni. He said – “If I bowled too slow, Dhoni would come and ask me to vary my speeds. He would also tell me which line worked better – outside off or at the stumps. Of course, everyone told me it was my googly that troubled them the most. But the ideal wicket-taking line would be [the ball spinning away] from the stumps off a good length. Looking back, I feel I should have probably done that a lot more.”

Ashwin, like many realized the kind of window that the IPL opens up for young talents in the game to come out and compete with the best in the world. He felt that the level of cricket played is quite high in the tournament.

“Bowling in the CSK nets last year was a trial for the IPL. It gave me a lot of confidence,” he says. “[This year] I was able to gauge myself at the international level. Now I have a better idea of where I could go wrong and how I could possibly rectify [those errors]. “If I go to the nets and practice, I know the results I can achieve by bowling in a certain manner. The quality of batsmanship in the IPL is much better, so you need to up your level to succeed.” 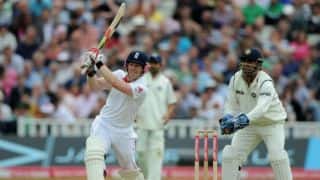