Quinton de Kock is the second youngest player to score a century in the IPL.

Quinton de Kock makes a mockery of Royal Challenger’s (RCB) bowling as he took Delhi Daredevils (DD) to a comfortable seven-wicket win in Indian Premier League (IPL) 2016 at Bengaluru. De Kock scored his maiden IPL ton and the RCB bowlers did not have any answers to him. He put on 100-plus stand with Karun Nair, who also remained unbeaten on 58. He was calm under pressure and after taking some time in the initial stages, he started going after the bowlers. De Kock also became the second youngest player to score an IPL cebtury.  De Kock however remains DD’s as he did not let the required run rate go very high. DD with this win have registered two wins in three matches. FULL CRICKET SCORECARD: Royal Challengers Bangalore vs Delhi Daredevils, IPL 2016, Match 11 at Bengaluru

RCB on the other hand, in their two matches have won one and lost one. The only part, which RCB can be happy about in the second innings, was the brilliant catch the combination of Shane Watson and David Wiese took to dismiss Shreyas Iyer. Barring Shane Watson, everyone went for runs and after 15 overs or so in the second innings, it became evidently clear that DD are going to romp home with ease. De Kock was eventually dismissed for 108 off 51, but Karun remained at the crease till the end. Full Cricket Updates Royal Challengers Bangalore (RCB) vs Delhi Daredevils (DD) IPL 2016 Match 11 at Bengaluru

Earlier, a magnificent display from AB de Villiers and Virat Kohli has RCB to 191 for 5 in their 20 RCB lost Chris Gayle in the very first over for a duck, but Kohli and de Villiers put on 107 runs in just 65 deliveries and that put RCB in the driver’s seat. De Villiers smashed nine fours and a six and he was eventually dismissed for 33-ball 55. Kohli however carried on his good form and took the bowlers apart along with Shane Watson, who came into bat at No. 4.

Watson and Kohli put on 63 for the third wicket that took RCB close to the 200-run mark but some quick loss of wickets ensured that RCB fell just short. Zaheer Khan got the early breakthrough, but he struggled in the overs after that. He went for 50 runs in his four overs and the batsmen looked in no trouble whatsoever after the initial stages. Zaheer looked to rotate his bowlers, but he could not get the desired results out of them as they were belted out of the park with ease.

Sarfaraz Khan could not emulate his heroics from the previous match as he was run out for just 1.Kohli’s innings finally came to an end when he was caught in deep of Mohammed Shami. RCB however failed to reach the 200-run mark and will feel that they have fallen about 20 runs short in this match. Kedar Jadhav and David Wiese were the two unbeaten batsmen for RCB, but they failed to take RCB past 200 as the bowlers started to pull things back a little bit.

Earlier, DD had won the toss and elected to bowl first. Shami made a return to the team in place of all-rounder Jayant Yadav. For RCB, they roped in David Wiese in place of Adam Milne and Sreenath Aravind replaces Stuart Binny in the side. 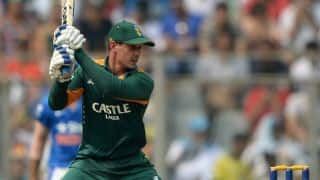