Bengaluru: Rising Pune Supergiants leg-spinner Adam Zampa today said that IPL side Royal Challengers Bangalore skipper Virat Kohli was playing like a machine right now and he has special skills to time his innings to perfection. “Virat Kohli at the moment is batting like a machine, he times his innings very well,” Zampa told reporters at the post-match press conference here after Kohli hit 108 not out to guide RCB to a seven-wicket win over Pune. FULL CRICKET SCORECARD, Royal Challengers Bangalore vs Rising Pune Supergiants, IPL 2016, Match 35 at Bangalore

Zampa said Kohli did not rush to smack the ball in the beginning, but built on the innings and then hit those lusty blows at the later stages of the match. “He does not rush at the start of innings. He gives himself time, and then hits the ball all round the ground, 360 degrees, so that’s what makes it very hard to bowl to. He times his innings very well,” he said. Zampa said with the Chinnaswamy Stadium ground being small and outfield lightning quick, it is too difficult to tie Kohli down or make him commit mistakes. READ: Virat Kohli breaks Sachin Tendulkar’s IPL record!

On his IPL debut, Zampa said it has been a good experience, though the atmosphere is different from a World Cup match, which he played here for Australia. “It has been a very good experience. I have played here for Australia in the World Cup and it’s a little bit different the atmosphere, visibly, in the IPL. Mostly Indian players and some awesome overseas players. The atmosphere is great,” he said. On why off-spinner Ravichandran Ashwin got just one over to bowl, Zampa said he guessed captain Mahendra Singh Dhoni did not bring him on while two right-handers were at the crease. READ: Virat Kohli calls his century in RCB vs RPS IPL 2016 match sweeter than his last ton

“I am guessing mostly because it was two right-handers in all the time, spinning in. Probably waiting for a left-hander to get in but they did not have many left-handers, so not many opportunities for him there,” he said. Asked about the team’s chances of making it to the play-offs, Zampa said, “Very difficult. We probably have to win every game now, maybe give away one but that’s about it. Having watched IPL from a distance in the past, we know that teams can make a comeback at the end but we have got to improve the way we are playing to even get close,” he added. 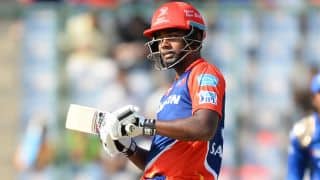