Brendon McCullum and Dinesh Karthik scored 64 and 48* respectively to take GL to 176 for 4 against MI in match 16.

The last time Mitchell McClenaghan faced Gujarat Lions (GL) at Wankhede Stadium, he picked 4 for 21. In match 16 of Indian Premier League (IPL) 2017, McClenaghan picked the dangerous Dwayne Smith off the second ball of the match. His first spell read 2-0-9-1. He then returned to give only 15 runs and take a another wicket in death overs to restrict GL to 176 for 4. However, Mumbai Indians (MI) had suffered an agonising defeat off the last ball when McClenaghan silenced Lions’ roar then. Whether history repeats or MI change their fortunes and jump to the top of IPL 2017 points table will be unfolded when the home team takes strike. LIVE CRICKET SCORECARD: Mumbai Indians vs Gujarat Lions Match 16

Rohit Sharma chose to field believing that the depth in MI’s batting helps them chase any sort of target. Same was the case against Royal Challengers Bangalore. After Samuel Badree’s hat-trick reduced MI to 7 for 4, Kieron Pollard rose to the occasion and took his team over the line in a 143-run chase. As a matter of fact, MI thrive under pressure and, with another big chase, MI will be raring to take on the challenge.

Despite losing Smith early, Suresh Raina and Brendon McCullum went full throttle and made full use of the conditions. With the ball coming onto the bat well, Raina had fun timing the ball. McCullum, on the other hand, looked out of sorts at first, but upped the ante as he got his eye in.

Harbhajan Singh has been at the peak of his form of late. Though he had taken only 2 wickets before this match, his economy read just above of 6. Against GL, with the likes of Raina and McCullum against him, Harbhajan bowled brilliant lines and did not allow the batters free their arms. He dismissed Raina for the fifth time in IPL. However, Harbhajan would have thanked his captain for taking a fine catch running behind at cover-point. He ended with figures of 1 for 22. Live cricket updates: Mumbai Indians vs Gujarat Lions Match 16

Malinga, who was rested in the last match, was back in the thick of things. Though he was on the wrong side of luck with McCullum going bonkers against him, he made amends with his yorker. Malinga knocked over McCullum for 64 after he scored his fifth half-century against MI.

While Malinga had some respite, his teammate Jasprit Bumrah had tough time containing the onslaught.

Dinesh Karthik collected three boundaries off Bumrah’s penultimate over to resurrect the innings. However, McClenaghan halted the rampage for a while to dismiss Ishan Kishan in his last over.

GL demoted Jason Roy to No. 6. When he came in, he had no option but to throw his bat at everything. He smocked two boundaries to take his team to a challenging total. Meanwhile, Karthik stayed unbeaten on 48 off 26 inclusive of two sixes and as many fours. 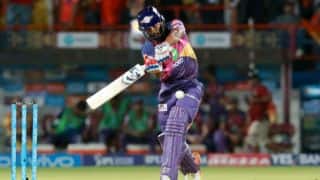