For a team which finished at the top spot in the points table last season, Gujarat Lions have thus made a poor start to IPL 2017. In the first game, the Suresh Raina-led side was crushed by Kolkata Knight Riders (KKR) by 10 wickets and in the second game, a 9-wicket defeat to Sunrisers Hyderabad puts them at the bottom of the pool. Gujarat Lions were outplayed in all departments, but it all began with a terrific spell from Rashid earlier in the game. Rashid claimed 3 quick wickets early on to jolt Gujarat, who could never really recover from the blows. FULL CRICKET SCORECARD: Sunrisers Hyderabad (SRH) vs Gujarat Lions (GL), IPL 2017 Match 6

Rashid accounted for Brendon McCullum (5), Aaron Finch (3) and Suresh Raina (5) to rattle Gujarat Lions, who were put in to bat by the defending champions. Jason Roy s fireworks at the start did get Gujarat Lions some quick runs early on, but the introduction of Rashid proved to be a masterstroke. Rashid would have claimed Raina on the first ball itself, but Warner spilled a catch at the first slip.

Dwayne Smith and Dinesh Karthik got together to add a vital 56 runs for the fifth wicket for Gujarat Lions, as their partnership turned out to be the only bright spot in the game. Smith cracked 4 boundaries and 1 six to score 37 off 27. Karthik was a tad slow in getting his runs, scoring 30 off 32 balls.

Sunrisers Hyderabad showed no qualms in their chase of a moderate target of 136. After seeing off a couple of overs, Shikhar Dhawan slammed a six off Raina in the third over. Warner followed his partner soon, clobbering the Gujarat captain for two more sixes in the same over.

Dhawan fell to Praveen Kumar when he got a leading edge, trying to work around a full toss on the leg-side. However, that was the only success which came for any Gujarat bowler, as each one of them were hammered for runs. Warner welcomed the two debutants Tejas Baroka and Basil Thampi for a couple of boundaries each off their first two balls.

Warner was back among runs after the end of the series against Pakistan. Despite getting off positive starts against India in the Test series, he could manage only one half-century. But there was no stopping Warner on Sunday evening, as his heavy bat came down with familiar swing and flow.

Warner finished the game with a six his third in the innings marking off a successful beginning for SRH in IPL 10. He remained unbeaten on 76, which came off 44 balls, studded with 6 boundaries and three hits over the fence.

On the other hand, Henriques was as fluent as he was in the first game. After scoring a half-century in the tournament opener, Henriques once again made most of his rich form, garnering 52 off 39 balls with 6 boundaries. His focus remained on rotating the strike, and the right-hander did not miss out on punishing the bad ones. Warner and Henriques added 108 runs for the second wicket in a little over 12 overs to take the game away from Gujarat.

Rashid, who returned with the figures of 4-0-19-3 and grabbed the Purple Cap, was adjudged the Man of the Match.

Man of the Match: Rashid Khan 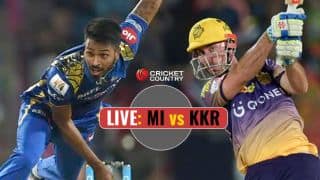