David Warner remained not out on 69, while Vijay Shankar was unbeaten on 63 as their match-winning partnership stood at 133 from 91 balls.

Chasing 155 runs’ target set by Gujarat Lions (GL) in match no.53 of the Indian Premier League (IPL) 2017, Sunrisers Hyderabad (SRH) got off to a poor start losing 2 early wickets. It took a calm and composed approach by David Warner in alliance with Vijay Shankar that guided Sunrisers Hyderabad into the playoffs of IPL 10. Both batsmen showed immense grit in the middle, playing out a controlled spell by Praveen Kumar and Ravindra Jadeja. With this win, Sunrisers Hyderabad move second in the points table with 17 points from 14 games. Now who finishes in top 2 depends on Kolkata Knight Riders (KKR) – Mumbai Indians (MI) match. If the former win it, they will remain in top 2 alongside top 2. If they lose, SRH will move to the second spot. Full Cricket Scorecard: Gujarat Lions vs Sunrisers Hyderabad, IPL 2017, Match 53

Coming to open the batting for SRH, Warner and Shikhar Dhawan managed to provide the fans with some fireworks. Dhawan in particular whipped himself quite a few boundaries before failing for 18. Praveen, returning into the side, displayed his experience by luring Dhawan into a wrong shot. He did not stop there, nabbing Moises Henriques, who after getting a four played away from his body and gave a simple edge to the wicket keeper. Henriques made just 4 runs.

Warner, in no time, was joined by Tamil Nadu s Ranji skipper Shankar, who was lucky to survive on 6 after Dinesh Karthik dropped a tough one. The pair soon brought some normalcy to the innings and calmed a few nerves in the dugout. While Warner played with complete Zen, Vijay showed quite the nervous energy in the middle.

Warner was lucky to survive a close caught-behind appeal after the umpire missed a snick off the front of the bat. Warner and Shankar brought up the 50-run stand in just 40-balls. Soon enough Warner brought up 37th IPL half-century in 41 balls. Shankar, meanwhile, continued to hit his strokes without any fear, that included a top-edge pull over long stop. Shankar notched up his maiden IPL fifty in 35 balls.

The pair of Warner and Shankar also went past 111-run stand set by Warner and KL Rahul, a record for the third wicket for Sunrisers Hyderbad. Warner remained not out on 69, while Shankar was unbeaten on 63 as their partnership stood at 133 form 91 balls.

Earlier in the day, Gujarat Lions, thanks to fifties from Ishan Kishan and Dwayne Smith, managed 154 runs despite a horrible batting collapse. From being on 111 for 1, they went to being 154 all-out. It was mainly due to some impeccable bowling by Rashid Khan and Mohammed Siraj, who finished with 4 and 3 wickets respectively. 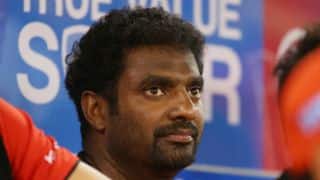 Muttiah Muralitharan overwhelmed with Narendra Modi calling out his name