Police arrested two bookmakers while they were organising betting during the IPL final on Sunday night, and also recovered 77 mobiles.

New Delhi: Police arrested two bookmakers while they were organising betting during the IPL final on Sunday night, and also recovered 77 mobiles from their rented flat in east Delhi, officials said. Those arrested have been identified as Sunil, 44, from Rohtak of Haryana, and Parvej, 38, from Shamli of Uttar Pradesh. Acting on a tip-off, police raided the flat in Kishan Kunj at around 9 p.m. on Sunday, to find the two organising betting on the final match of the Indian Premier League cricket tournament. “While Sunil was attending a phone call, Parvej was writing rates in a diary,” Omvir Singh, Deputy Commissioner of Police, East District said. FULL CRICKET SCORECARD: Rising Pune Supergiant (RPS) vs Mumbai Indians (MI), IPL 2017 Final at Hyderabad

Police recovered two diaries containing transactions of the bookies with their clients, 77 mobile phones, a calculator, a brown briefcase, and a microphone from the flat, Singh added. Police said they believe that a large network is involved and are investigating the matter. Earlier, the Delhi Police on Monday arrested nine bookies from Rohini area of the national capital for allegedly betting in the final match of the recently concluded Indian Premier League (IPL). The Delhi Police Crime Branch caught the nine bookies red-handed along with a book displaying betting rates, two betting boxes and 10 mobile phones from the Crowne Plaza Hotel. IPL 2017 Final: Delhi Police arrest 9 bookies

According to reports, these men were engaging in gambling over phone and internet. They were booked for allegedly betting on the IPL final match between Mumbai Indians and Rising Pune Supergiant (RPS) in Hyderabad, which the Rohit Sharma-led side went on to win by one run. 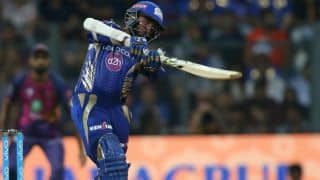