MI not only won by 1-run margin and broke the jinx against Rising Pune Supergiant (RPS) but also clinched the third IPL title.

Defending a score of 129 in the final of IPL 2017, Mumbai Indians (MI) bowlers rose to the occasion with magnificent spells in the death overs. MI not only won by 1-run margin and broke the jinx against Rising Pune Supergiant (RPS) but also clinched the third IPL title. In the 17th over, it was Jasprit Bumrah who started it all with the priced wicket of MS Dhoni. It was followed by a decent final over by Lasith Malinga, who went wicketless conceding 21 run the second best economical bowler after Karn Sharma. MI mentor Sachin Tendulkar could not thank enough the contributions of Malinga, who has been part of the side since 2009. Full Cricket Scorecard: Rising Pune Supergiant vs Mumbai Indians, IPL 2017 Final at Hyderabad

After the conclusion of a thrilling final, Tendulkar spoke to BCCI. He [Malinga] has done well for us for a number of years. I was so sure that he was going to do something great tonight. He might not have had a great season, but he is one guy who can change it in one over. Tendulkar also praised the new head coach Mahela Jayawardene.

Heaping praise on Jayawardene s coaching skills, Tendulkar added, Simply amazing. The first half wasn’t great for us. We got together during the break and Mahela gave a nice speech. We believed that we could pull this off. The fielding was great under pressure. I have always believed in the saying, once a champion, always a champion. 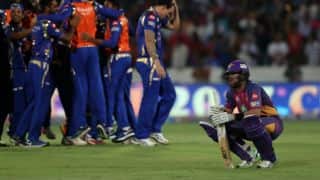