IPL 2017: Gautam Gambhir on Friday reached a commendable milestone, as he completed and went past 6,000 runs in his T20 career.

Indian batsman and Kolkata Knight Riders (KKR) skipper Gautam Gambhir on Friday reached a commendable milestone, as he completed and went past 6,000 runs in his Twenty20 (T20) career. He achieved the milestone during his tie against Zaheer Khan’s Delhi Daredevils (DD), in Match 32 of the ongoing Indian Premier League (IPL) 2017 at the historic Eden Gardens Stadium in Kolkata. He achieved another milestone, as he also scored 4,000 runs in the IPL. He is one of the most successful players in the tournament and has a number of records as well as milestones to his name. He has also scored the most runs for his side Kolkata till date. Recently, Gambhir also played his 100th match as the skipper for Kolkata. Full Cricket Scorecard, Kolkata Knight Riders (KKR) vs Delhi Daredevils (DD), IPL 2017, Match 32 at Eden Gardens

With this milestone, Gambhir also becomes the 13th player to score more than 6,000 runs in the format. He also becomes the fourth Indian after Suresh Raina, Virat Kohli and Rohit Sharma to achieve the landmark. As for the most runs in T20 career, it is still the big Jamaican Chris Gayle, who leads the chart with over 10,000 runs, followed by the likes of Brendon McCullum, Brad Hodge, David Warner, Kieron Pollard, Shoaib Malik, Dwayne Smith, Luke Wright, David Hussey and Kumar Sangakkara. Full Cricket Updates, Kolkata Knight Riders (KKR) vs Delhi Daredevils (DD), IPL 2017, Match 32 at Eden Gardens

Most T20 runs by an Indian cricketer

Most runs as captain in #IPL:

Gambhir is also now the third most run scorer in IPL, as he is preceded by Suresh Raina and Virat Kohli, as a result making him the third Indian to achieve the landmark. Gambhir has now most runs (3,311) for an IPL captain, surpassing MS Dhoni. He is now followed by Dhoni, Kohli, Adam Gilchrist and Rohit. 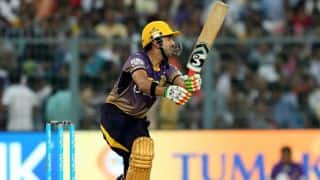