Having been a part of some intense cricket in their previous few meetings, it seems Brendon McCullum is enjoying James Faulkner's company and as well as some light-hearted banter which is around cricket.

Australian all-rounder James Faulkner has often been on the receiving end of the banter on social media. Faulkner has been trolled on social media by Kevin Pietersen, whom he calls one of his close friends in the circuit. Faulkner and Pietersen play for the same team Melbourne Stars in the Big Bash League (BBL) and their banter is obvious. However, on Wednesday, Faulkner found a new partner in his banters in former New Zealand captain Brendon McCullum. The two cricketers have been a part of intense Trans-Tasman rivalry, but the IPL provides them to relax and enjoy the lighter side of cricket. Full Cricket Scorecard: GL vs KKR

Faulkner and McCullum are currently among the overseas cricketers for the Gujarat Lions (GL) in the current season of IPL. Having been a part of some intense cricket in their previous few meetings, it seems that the former New Zealand captain is enjoying Faulkner’s company and as well as some light-hearted banter which is around cricket. It all started with a tweet which was posted by Faulkner from his official account with a photo of him with McCullum, saying how much he enjoyed uprooting the explosive batsman s off-stump.

Just running @Bazmccullum through the time I blew his off peg out….

McCullum, who was probably in funny mood, replied back to Faulkner by denying the fact that he ever played against him.

Faulkner hit back McCullum by posting a photo from the first ODI of Chappell-Hadlee Trophy 2015-16 at Auckland. In the picture, Faulkner is seen celebrating after dismissing McCullum for 44.

The former Kiwi batsman was probably in no mood to stop as he continued to take dig at Faulkner and gave his justification by writing, “Agh good work mate. That helps! I did think it was strange that an actor was running drinks for Aus.” Faulkner responded to it by posting few emoticons and finally the banter ended.

@JamesFaulkner44 Agh good work mate. That helps! I did think it was strange that an actor was running drinks for Aus. pic.twitter.com/j6HcltII8V

The duo is expected to be seen in action in the first match for Gujarat Lions (GL), which will be played against Kolkata Knight Riders (KKR) at Rajkot on Friday. 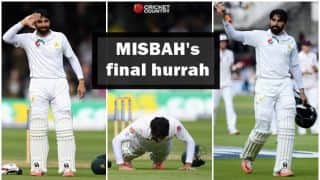 No, Misbah-ul-Haq does not deserve to go like this 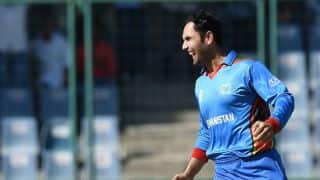