Karun Nair struck a fine half-century to power Delhi Daredevils (DD) to a formidable total against Rising Pune Supergiant (RPS), in match No. 52.

Karun Nair struck a fine half-century to power Delhi Daredevils (DD) to a formidable total against Rising Pune Supergiant (RPS), in match No. 52 of the ongoing Indian Premier League (IPL) 2017. Electing to bat first, Delhi made a poor start but Nair combined with several middle-order batsmen to help his side reach 168 for 8 in their allotted 20 overs. Nair faced 45 balls and cracked 9 fours to score 64, while Rishabh Pant (36) and Marlon Samuels (27) made vital contributions to put pressure on their opposition, who desperately need a win on Friday night to keep hopes of going to the next round alive. FULL CRICKET SCORECARD: Delhi Daredevils (DD) vs Rising Pune Supergiant (RPS), IPL 10, Match 52

Pune made an early breakthrough when Sanju Samson was run out off the final ball of the first over. Having put a sweeper cover in place, RPS had forced the Delhi Daredevils batsmen to remain content with singles. Off the final ball, Nair played a stroke late and started off for a run. It turned out to be a horrible call as Samson did not even have the option of putting in a dive, and a direct hit from Ben Stokes ended his innings early. FULL CRICKET UPDATE: Delhi Daredevils (DD) vs Rising Pune Supergiant (RPS), IPL 10, Match 52

RPS breathed a huge sigh of relief when Jaydev Unadkat struck with the first ball of the second over, snaffling the key wicket of Shreyas Iyer. Iyer tried to cut a ball outside off, got a faint edge and MS Dhoni collected an easy catch. With this, Dhoni completed his 100 dismissals in IPL (96 as a wicketkeeper, 4 as a fielder).

This was when Nair and Pant got together and turned around the tables for Delhi Daredevils. Delhi then recovered from a perilous position to one that of command, thanks to a counter-attack that came off well for the home side. It all began in the fourth over when Nair thwacked two fours off Washington Sundar on the leg-side, while Pant finished with a flat six on the leg side.

Stokes came on to bowl the fifth over. He was smacked for 3 fours, all coming off Nair s bat. Pant joined his partner soon, getting 3 fours in the next over from Shardul Thakur to shrug off a sluggish start.

Nair and Pant were equally aggressive in their partnership of 74 runs for the third wicket. They not only helped Delhi to recover from the early blows, but also put them on the path to a big score. However, just when Pant began looking at his best, he perished for a 22-ball 36 with the help of 4 fours and 2 sixes. In the ninth over, Pant had already hit a four and a six off the leg-spinner, but he paid the price of playing a shot too many, and was caught at long-on.

Delhi took a while to recover from that blow, as the next 2 overs saw them adding a mere 6 runs. RPS might have had another over of dominance, but Marlon Samuels smacked consecutive sixes off Thakur in the 12th over to take Delhi past the 100-run mark.

Samuels and Nair added 34 runs in a little over 5 overs before Dhoni s splendid effort ended the stay in the middle for the latter. Samuels swung his bat with a lot of power off a slower ball from Dan Christian; the ball took the edge and soared over Dhoni. However, Dhoni had other plans: he timed his jump perfectly, stretching out to take a one-handed catch to affect the fourth dismissal of the innings. Samuels made a 21-ball 27, studded with 2 sixes and a four. In all, Dhoni had a role to play in 3 of the 8 wickets that Delhi Daredevils lost.

The scoring rate went down for Delhi as Corey Anderson too fell against Dhoni s supremacy. On a delivery away from him, Anderson ventured out and Dhoni was quick to remove the bails.

Nair, who had slowed down since the dismissal of Pant, finally completed his half-century, in the 16th over of the innings. He completed his first fifty across formats since that 303 not out against England late last year.

Towards the end of the innings, Delhi had a few of their tailenders connecting the ball well, but none of them contributed heavily. Amit Mishra punched a ball extremely well to send it flying over the bowler’s head for six, while Pat Cummins swung the bat to whack the ball over deep midwicket before being cleaned up by Stokes.

Stokes also claimed a terrific catch at the boundary ropes when it looked like Mohammed Shami had connected the ball well for a six. Stokes jumped to take the ball over his head, sent it back in the playing area and came inside to complete the catch. 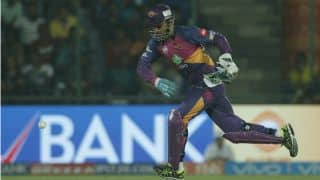