After Kings XI Punjab (KXIP) slumped to an embarrassing 51-run defeat to Delhi Daredevils (DD), in Match 15 of the ongoing Indian Premier League (IPL) 2017 at the Feroz Shah Kotla Stadium in New Delhi on Saturday, KXIP skipper Glenn Maxwell said his side let opportunities to slip away from them. Maxwell was also of the opinion that the Indian bowlers for KXIP were ineffective. Maxwell said that KXIP had the chance to get the momentum in their favour in the very first ball, when they had the chance to dismiss Sanju Samson. However, failure to covert the chance into a catch was followed by an ordinary performance on Saturday night. FULL CRICKET SCORECARD, Delhi Daredevils (DD) vs Kings XI Punjab (KXIP) Match 15 at Delhi

“The weaknesses tonight was everything, the batting, the bowling, the fielding, it was pretty average. We let opportunities to slip. We drop Corey Anderson when he was in single figure as well. They were not straight forward chances but in T20 cricket, half chances needed to be taken, especially when they won toss and batted, we need to make sure we take our chances. They did not let us settle and get into the game. That was frustrating because we have got skills. The guys are good enough but it’s not happening,” he said, as reported by PTI. FULL CRICKET UPDATES, Delhi Daredevils (DD) vs Kings XI Punjab (KXIP) Match 15 at Delhi

However, despite the poor performance by the Indian bowlers in their side, Maxwell backed them to fire in the next tie. “They were good enough to dominate batsmen in the first two matches. It not quality it’s about execution on the day,” he said. Full cricket updates: Delhi Daredevils vs Kings XI Punjab Match 15 at Delhi

Meanwhile, all-rounder Corey Anderson of Delhi Daredevils felt that his 39-run knock and a total score 188 was enough for DD to snatch the win from KXIP. “It was a great start by Sanju (Samson) but in the middle overs we should not have lost those wickets that affected our run- rate. We thought 160 was a good total. Getting those 20-30 runs was vital in the end and winning by 51 was comprehensive,” said Corey.

Speaking on his role as an all-rounder, Anderson said, “It depends on what the team requires from me. If I need to come and knock around a bit and bat till the end or If I need to bowl 2 or 4 overs. It’s easy in IPL being selfish. I am probably more of a batter who bowls. Getting the early wickets was key. It’s difficult to come back, chasing such a total. The other day Mumbai did it. But it was not a big total. It was a tough wicket to get going.” 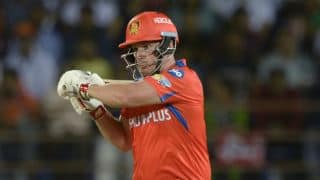