"In the last game, like I said, we let ourselves down. That happens," said Kolkata Knight Riders (KKR) coach Jacques Kallis.

Following a slender 14-run loss against Glenn Maxwell’s Kings XI Punjab (KXIP), in match 49 of the Indian Premier League (IPL) 2017 at the Punjab Cricket Association (PCA) Stadium in Mohali on Tuesday, Kolkata Knight Riders (KKR) have a must-win game at hand against Mumbai Indians (MI). KKR need a win to qualify for the IPL 10 playoffs. Meanwhile, head coach Jacques Kallis has said KKR were just not good enough against KXIP to earn a win, which could have sealed KKR’s spot in the IPL 2017 playoffs. KKR, who were chasing an average total of 168, could only manage 153 for 6 in 20 overs. FULL CRICKET SCORECARD: Kings XI Punjab (KXIP) vs Kolkata Knight Riders (KKR), IPL 2017, Match 49 at Mohali

“We let ourselves down in the last game. We got off to a great start and I think the platform has been well set throughout the season. We have had very good starts and most of the times we have converted them. In the last game, like I said, we let ourselves down. That happens. In T20 cricket, you don’t win all matches. There are hard totals that you chase down… and easy totals that you can’t chase down. So you gotta plan for that. We will take some valuable lessons going into the next game. The guys are ready to come back from that. Hopefully, we can put up a good performance in the next game,” said Kallis, as reported by IANS. IPL 2017: Kept changing length and pace to keep batsmen guessing, says Mohit

“We have pretty much qualified for the play-offs. It’s a different kind of pressure now. We have still got one game to go. Again, it’s not about the season but worrying about the next game. We don’t think too far ahead, just try and plan for the next game,” he added.

Meanwhile, KKR CEO Venky Mysore spoke on KKR players participating in a golf session at the Royal Calcutta Golf Club in Kolkata. “Many of our players enjoy golf. It’s a good way to take your mind off cricket. The last seven years that I have been involved with KKR and Jacques has been involved, we have had some enjoyable rounds of golf. Three years ago we decided to make it formal. I had grown from strength to strength. I have found this a terrific platform to say thanks to the city of Kolkata for all the love and support. We converted this last year to a charity golf event. There is tremendous support from all our players. Even the non-golfers are coming this evening. Also a lot of children showed up last year,” he said. If IPL teams were football clubs 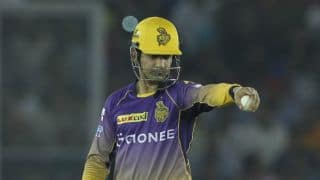