Kings XI Punjab (KXIP) drubbed Delhi Daredevils (DD) by 10 wickets in match 36 of Indian Premier League (IPL) 2017. Playing at their home ground Punjab Cricket Association IS Bindra Stadium, the Kings bowled out the Daredevils for 67 their lowest ever in IPL. With this comprehensive win, the Kings boosted their Net Run-Rate and jump to No. 5 in the IPL 2017 points table. The Daredevils, on the other hand, still falter at the bottom. They were reduced to nothingness by Sandeep Sharma who was awarded Man of the Match for bagging a four-wicket. In the second innings, openers Hashim Amla and Martin Guptill finished things off in the eighth over. Full Cricket Scorecard, Kings XI Punjab vs Delhi Daredevils, IPL 2017, Match 36

When the sides met previously , the Daredevils had hammered Kings XI Punjab by 51 runs at Feroz Shah Kotla. The Kings, despite the loss, elected to bowl first. They wanted to make full use off the freshness of track and exploit the bounce it offers. Sandeep executed exactly the same. He sent the first three wickets packing within the batting Powerplay. He also took ripper of a catch diving to his left of his own bowling. He then dismissed Kagiso Rabada in his last over to register his second four-wicket haul in IPL.

In the absence of Zaheer Khan, Karun Nair was appointed as the stand-in captain. However, he had a tough outing. He scored 11 off 10, failing to lead from the front when the others were falling apart. Eventually, the Kings dismissed Nair’s fallible team to the third lowest total in IPL.

While Varun Aaron and Akshar ended with combined figures of 6-0-25-4, Mohit Sharma and Glenn Maxwell took a wicket apiece.

Chasing a meagre 68, Guptill went bonkers and pocketed his maiden half-century in IPL. Amla, at the other end, remained unbeaten on 16. Both blasted 7 fours and 3 sixes combined. Live cricket updates: KXIP vs DD, match 36

Karun Nair after the match said, “Don’t think it was a 67 all-out wicket. We lost too many wickets at the start. It was just a lack of intent, I guess. We didn’t get the kind of partnership we wanted. The team chat in the innings break was nothing much but we wanted to make them work for each run. I don’t think there was anything strange in the wicket. Slightly slow but wasn’t a 67 all-out wicket, as I said.”

Man of the Match: Sandeep Sharma 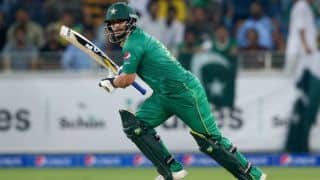 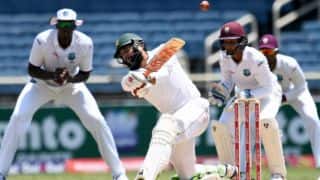