It was Mumbai Indians' collective effort that places them at the third spot in the points table, while Sunrisers Hyderabad stumble to No. 2 in IPL 2017.

Sunrisers Hyderabad (SRH) and Mumbai Indians (MI) had won 8 games against each other before they squared off in match 10 of Indian Premier League (IPL) 2017. However, MI now have an upper hand after edging past SRH by 4 wickets with 8 balls to spare at Wankhede Stadium in Mumbai. While Jasprit Bumrah and Harbhajan Singh combined to take 5 wickets to restrict SRH to 158 for 8, Nitesh Rana scored 45 off 36 to finish the chase in 18.4 overs. All in all, it was their collective effort that places them at the third spot in the points table. LIVE CRICKET SCORECARD, Mumbai Indians vs Sunrisers Hyderabad Match 10

Parthiv Patel was at his sublime best when he took the crease to chase down a meagre 159. He hit 5 fours off Ashish Nehra. When Nehra bowled short, he scythed it between the fielders. When he bowled full, he delightfully flicked it on the on-side boundary. Jos Buttler, at the other end, scored 3 boundaries before Nehra foxed him with a slower ball.

Rohit, who had batted at No. 3 and No. 4 respectively in the first two games, came one-down. Given that he was dismissed off Imran Tahir’s wrong ‘un in MI’s opener, David Warner straight away introduced Rashid Khan in the fifth over. The result was no different. Rohit’s ordinary defence was exposed, and he was trapped lbw for 4 off a googly. He has now scored only 9 runs in 3 matches.

The wicket did not affect Parthiv’s brand of cricket. He smashed a couple of fours until he holed out to Bhuvneshwar Kumar.

Nitish Rana, Man of the Match of the previous match, continued where he left from. He made a mockery of the chase, swatting 3 fours and 2 sixes. With the help of Krunal Pandya’s late blitz, MI won the match with 8 balls to spare.

In the SRH innings, barring Warner and Shikhar Dhawan, none of their batters could step up to the task, losing 8 wickets in the last 9.1 overs.

Come to think of it, the top-scorers from both teams were left-handed batsmen. Amidst their onslaught, four bowlers Bumrah, Harbhajan, Rashid, and Bhuvneshwar did not concede more than run a ball. Bumrah was awarded Man of the Match for his 3 for 24, taking crucial wickets of Ben Cutting, Naman Ojha, and Rashid.

All the same, Nehra and Mustafizur Rahman leaked as many as 80 runs off 6.4 overs between them.

Man of the Match: Jasprit Bumrah. 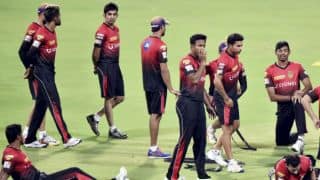