Rashid Khan bamboozled Gujarat Lions (GL) batsmen in the sixth match of the ongoing Indian Premier League (IPL) 2017 for Sunrisers Hyderabad (SRH), sparking a collapse from which they could never really recover. Rashid returned with impressive figures of 4-0-19-3 in his second IPL 10 match to help SRH restrict for a moderate score of 135 for 7 in 20 overs, as the defending champions continued to take giant strides in the initial stages of IPL 2017. For Gujarat Lions, Jason Roy (31), Dwayne Smith (37) and Dinesh Karthik (30) provided some resistance after the top order was blown away, but their 56-run stand for the fifth wicket was not enough to take them past even 150. FULL CRICKET SCORECARD: Sunrisers Hyderabad (SRH) vs Gujarat Lions (GL), IPL 2017 Match 6

Rashid rattled Gujarat Lions early on in the contest, bringing a halt to their charge with a flurry of wickets. The Afghanistan leg-spinner proved his mettle once again when he trapped Brendon McCullum leg-before on the penultimate ball of the fifth over for 5, but not before Gujarat Lions were off to a positive start. FULL CRICKET SCORECARD: Sunrisers Hyderabad (SRH) vs Gujarat Lions (GL), IPL 2017 Match 6

Jason Roy began from where he left off in the first game. He cracked two boundaries off Bhuvneshwar Kumar in the second over, one straight down the ground the other one over the cover region, moving away to make room. Roy got a couple of boundaries in the next over as well, off Bipul Sharma, hitting him towards midwicket and then following it up with a boundary just over mid-on. Ashish Nehra was hit for a boundary as well, with Roy putting in a lot of power to hammer the ball towards midwicket to get his fifth boundary.

Sunrisers Hyderabad made the right call in bringing in Rashid at this point of time, who struck twice successfully. After removing McCullum for his second low score on the trot in the tournament, Rashid almost had Suresh Raina caught by David Warner in the first slip on the first ball that Gujarat Lions captain faced. It was a delivery, a googly again, outside off inviting Raina to drive. The batsman went for his stroke, but got an edge that went to the first slip.

Warner, usually one of the best fielders, made a mess of it as the ball popped out of his hands and Rashid was thus denied his third wicket.

In the next over, Roy pulled a short ball hard, off Nehra, but found Shikhar Dhawan at short midwicket. The ball was collected by the fielder very close to the ground, but Dhawan claimed the catch immediately. Umpire Nigel Llong decided to go upstairs with the soft signal against the batsman. While the TV replays remained inconclusive, the TV umpire decided to rule it against the batsman.

Rashid continued for the third over, and there was perhaps nothing different that Aaron Finch could do on the googly which was used aggressively by the bowler. Finch prodded forward to play for the spin, but the ball turned the other way, and rapped him on the pads. Like McCullum, Finch too had a poor game with the bat on the trot.

Raina and Karthik decided to put up a fight, but their resistance did not last long. Rashid returned in the 10th over of the game to remove Raina, getting him out leg-before for 5.

This was when Smith and Karthik got together, and added 56 vital runs for the fifth wicket before the procession started again. Smith was the more aggressive batsman among the two, cracking 4 boundaries and 1 six to score 37 off 27 balls. Before he was dismissed trying to scoop a leg-side delivery off Nehra, Karthik got a faint edge and gave a simple catch to Naman Ojha. Karthik hit 2 boundaries to score 30 off 32.

Earlier in the innings, Gujarat Lions were put in to bat after Sunrisers Hyderabad won the toss and elected to field. Gujarat Lions made two changes in their side, with Kerala express pacer Basil Thampi and leg-spinner Tejas Baroka coming in for Manpreet Gony and Shadab Jakati. 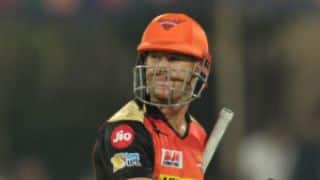