Rajkot: Describing Indian all-rounder Ravindra Jadeja as a three-dimensional player, Gujarat Lions‘ head coach Brad Hodge said it was very difficult for any cricketing side to replace him. The ace left arm spinner has been advised rest by a medical team of the BCCI for at least two weeks and may miss the early IPL action. Talking to PTI, Hodge said, “Ravindra was an unbelievable player in the recently concluded Test series [against Australia] and I understand that he needs some time to get cent per cent fit.” On whether Gujarat Lions has a player who can replace him, Hodge said, “No, he can’t be replaced..he is a three-dimensional player…he bats, bowls and fields like a jet. So its very hard to replace him in any cricketing side.” IPL 2017: GL players, squad, captain, coach, home ground in IPL 10

Another all rounder Dwayne Bravo is injured and Lions will have to play a couple of matches without the services of Jadeja and Bravo. “Bravo, hopefully he will be fit around 20th of April. He will be key player for some games and when he comes he brings nice energy and when he is a good man around the group, he’s always happy, dancing and having fun, so we are looking forward to him to join us,” Hodge said.

On the absence of some star cricketers in IPL-10, Hodge said, “this is a good opportunity for young talented players to step in and perform well.” Gujarat Lions will play their first match in the IPL at SCA stadium in Khandheri on April 7. In 2016, Lions had won both the matches against KKR. IPL 2017: Experience to play on IND wickets will help GL, feels Munaf

“I am sure KKR is looking to bounce back. We played very well both the times last year but KKR is a very dangerous side having players like Gautam Gambhir, Robin Utthappa, Manish Pandey.. all are very good players. They have got some skills in bowling too having players like Sunil Narayan and Umesh Yadav. Yadav is not going to be part of this game, but the match is going to be a good contest, as KKR is a skillful side and you have to play good cricket to beat them.”

Talking about 2016’s performance as well as the current squad, Hodge said, “We had a wonderful season last year. I think the team was very well led by Raina and we have a lovely combination of youth and experience. We have bought some fresh faces to keep the energy level up in the group and the side is looking very strong. The squad is good combination of youth and experience. Experience is very important, I think more important in T20 and we have got some superb players but anything can happen on a day in T20.” IPL 2017: GL have much balanced side than in 2016, feels Sitanshu Kotak

When asked about the team combination Hodge said, “In any team you never have the perfect comination, you always have may be one or two holes. We have still a few days to work it out. We have some serious international players and to get the right combination is going to be difficult. Brandon McCullum, Aaron Finch, Jason Roy and Dwayne Smith all are having good strike rate. So we have to wait and see to set the right combination.”

Hodge considers Gujarat Lions’ batting as its strength, but also praised his bowlers for doing a good job in 2016. “Of course batting is Lions’ strength, but we have some superb bowlers. Praveen Kumar was excellent last year. Dhaval Kulkarni had 17 wickets last year. Having Bravo, Kaushik Shivil was excellent. I think together they worked nicely.”

Gujarat Lions’ has a very strong batting line up having openers like Brandon McCullum, Aaron Finch and Dwayne Smith. This time, Jason Roy has joined the team while in the bowling department, the team has bowlers like Basil Thampi, Munaf Patel, Manpreet Gony, James Faulkner, Andrew Tye, Dhaval Kulkarni and Praveen Kumar. 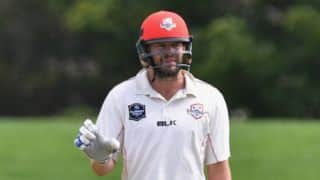