After dismantling Royal Challengers Bangalore (RCB) a few nights ago with ball, Kolkata Knight Riders (KKR) produced one of the most dominant batting performances in the ongoing Indian Premier League (IPL), against Rising Pune Supergiant (RPS) in match No. 30. Chasing 183 to win, KKR made mincemeat of Rising Pune Supergiant s bowling attack, with Robin Uthappa and Gautam Gambhir ensuring a 7-wicket victory at the Maharashtra Cricket Association (MCA) Stadium in Pune. Uthappa smacked a 47-ball 87 and Gambhir scored 62 as KKR stamped their authority once again in the tournament. KKR scored 184 for 3, and won with 11 balls to spare. Full Cricket Scorecard, Rising Pune Supergiant vs Kolkata Knight Riders, IPL 2017, Match 30

Kolkata Knight Riders went on a rampage against an ordinary bowling attack of Pune. Sunil Narine started off attacking right from the beginning, but he could not play a big innings on Wednesday night. Having collected a four off the first over and two off the second, Narine was run out in the third over for an 11-ball 16.

This was when Gambhir and Uthappa joined forces and took the game away from Rising Pune Supergiant. Uthappa began with a four off Shardul Thakur in the fourth over, and Gambhir slammed two more off Washington Sundar in the next. In the Powerplay, KKR added 45 runs for the loss of Narine.

Uthappa was on a mere 11 when Yusuf Pathan dropped him. Then he smashed 6 sixes and 7 fours en route an explosive 87. He added 158 runs with Gambhir for the second wicket in a little over 14 overs, taking the game away from RPS after the home side had done the hard work of putting up a big total on what looked like a tough wicket in the first half of the game. FULL CRICKET SCORECARD: Rising Pune Supergiant (RPS) vs Kolkata Knight Riders (KKR), IPL 10, Match 30

Jaydev Unadkat made an error that proved costly for Rising Pune Supergiant. A slog-sweep off Imran Tahir in the seventh over was not executed well by Uthappa. Placed at deep midwicket, Unadkat had the chance to get rid of him. However, it would have been an overhead catch for the fielder, who banged his head on the ground as the ball popped out of his hands and rolled down for another boundary.

Uthappa soon let Rising Pune Supergiant know how costly was that dropped catch was. Against Sundar, in the eighth over, Uthappa smacked a four past third man and followed it up with two sixes one each over long-off and long-on. Tahir was punished in the next over for bowling too full, as Uthappa picked the long-on region once again to hit his third six of the innings.

Unadkat came on in the 10th over to try and rectify his mistake, but Uthappa was in no mood for mercy, and hammered the bowler for two fours before Gambhir ended the over with the third four of the over. After 10 overs, KKR had brought up their 100 runs for just one wicket.

Steven Smith has spoken about Rahul Tripathi s bowling credentials at the toss. With KKR being on roll, Smith called upon Tripathi in the 12th over. Uthappa and Gambhir hit a four each off him to keep the juggernaut rolling. Gambhir brought up his half-century off 35 balls in the 14th over of the chase. He called for a sharp second run and made it just in time as Dhoni attempted a run out.

The equation came down to a run-a-ball with KKR needing 36 off the final 6 overs. However, perhaps being exhausted from a superlative innings, Uthappa fell when KKR were just a few hits away. Gambhir was dismissed as well, for a 46-ball 62, studded with 6 fours and a six. The innings helped Gambhir to reclaim the Orange Cap as well.

Darren Bravo finished things off with a delightful cover-drive reminiscent of Brian Lara. Uthappa was adjudged the Man of the Match for his belligerent innings.

Earlier in the match, Smith scored 51 not out, Ajinkya Rahane 46 and Tripathi a quick 38 to help Rising Pune Supergiant to 182 for 5 in their allotted 20 overs. MS Dhoni showed ominous form as he hit 2 sixes to score 23. 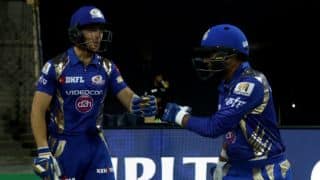 IPL 2017: Jos Buttler is one of the most destructive batsmen in world, says Parthiv Patel