Robin Uthappa was involved in an 158-run stand for the second wicket along with Gautam Gambhir against Rising Pune Supergiant (RPS) in IPL 2017.

Following a match-winning knock of 87 for two-time champions Kolkata Knight Riders (KKR) against Steven Smith’s Rising Pune Supergiant (RPS), in Match 30 of the ongoing Indian Premier League (IPL) 2017 at the Maharashtra Cricket Association (MCA) Stadium in Pune on Wednesday, Robin Uthappa has now scored enough times on the Pune track. He played his 19th IPL tie at this venue, as he joined hands with Smith, who too did the same. He was also involved in a stellar 158-run stand for the second wicket along with skipper Gautam Gambhir, who smashed 46-ball 62 to steer Kolkata to a modest 7-wicket win, as they go atop the points table. Full Cricket Scorecard, Rising Pune Supergiant (RPS) vs Kolkata Knight Riders (KKR), IPL 2017, Match 30 at Pune

Speaking on his innings, Uthappa said in an exclusive interview with iplt20.com, “It was an important innings. They batted well to get 182 and we pulled things back after the 16th over. They batted well again in the last two overs, so we knew we had to keep the run-rate going even after the first six overs. We could not take our foot off the pedal and were looking to get nine runs from every over and we were in a very good position by the 15th over. All in all, it was a very good day.”

He also spoke on his net practice session against Chinaman Kuldeep Yadav. “Obviously, you keep to him as often as you can in the nets and that helps in understanding what he is bowling and when he is bowling it. Also, during the course of the game you understand what the batsman is doing and what the bowler is probably going to bowl. So, there is a sense of anticipation as well. It worked today for me and I am very happy,” he said. Full Cricket Updates, Rising Pune Supergiant (RPS) vs Kolkata Knight Riders (KKR), IPL 2017, Match 30 at Pune

On being asked if Kuldeep was the most difficult bowler he has kept wickets against, he said it was Piyush Chawala instead. “Piyush Chawla is an extremely challenging bowler as he has different kinds of googlies. It is hard work keeping to all our spinners [Sunil Narine, the third spinner in the side], but I enjoy the challenge. It makes keeping a lot more fun,” he said.

Speaking on his performance and how important it is for KKR this season, he said, “It is as important as any other season. It is important to keep performing and I have been doing that. The dream is to play for India again and represent the country in Test matches. The dreams are there but one can’t think too far forward. You want to stay in the present and give your best foot forward. I believe hard work never goes unnoticed. I truly believe my turn will come.” IPL 2017: I have a lot of faith in what I am doing, says Uthappa

Of late, it has been noticed that Kolkata’s mystery spinner Sunil Narine has more or less become a batting asset for Kolkata as well, as he is seen opening batting along with Gambhir for Kolkata, and is often off to an explosive start. This has also made Uthappa come a spot down the order. On being asked if he is forced make some changes in his approach for this, he said, “As a batsman, you lose out on the advantage of batting in the first six overs. I have immense faith in my batting; I know I don’t need that kind of advantage to score the runs that I need to score for the team. I back myself and I am really confident and sure about my batting.”

He concluded by speaking on his 158-run stand along with Gambhir that sealed Kolkata’s fate against Pune on Wednesday. “Gauti [Gambhir] and I understand each other very well when we are batting. We understand the importance of strike rotation and support each other in that sense. When we take a decision on the field, we really stick to that decision, and when you do that, it works in your favour,” he concluded. 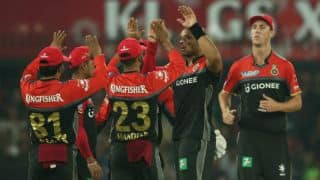