Sandeep Sharma’s remarkable four-wicket haul skittled out Delhi Dardevils (DD) for a paltry 67 in match 36 of Indian Premier League (IPL) 2017. Kings XI Punjab (KXIP), playing at their home ground IS Bindra Stadium in Mohali, finished off the proceedings in a matter of 17.1 overs. They allowed only 3 batsmen to score in double digits, with Corey Anderson (18) being the highest run-scorer. To make matters more fascinating, no bowler conceded over run a ball. This was also the first time they bowled out the Daredevils in IPL. This is DD’s lowest total so far. Full Cricket Scorecard, Kings XI Punjab vs Delhi Daredevils, IPL 2017, Match 36

The Kings and Daredevils lie in the bottom three of IPL 2017 points table. Though the former played one match more, they, too, are staring down the barrel. If both teams do not get back to winnings ways, they may as well lose out on booking a berth in the playoffs.

The Kings had failed to chase a target against the Daredevils in the previous contest. Despite that, they chose to field first again. That, on the contrary, went their way. Sandeep Sharma took only six deliveries to draw first blood. He had Sam Billings caught behind for a two-ball duck. T Natarajan then followed it up with a one-over over.

The man-in-form Sanju Samson broke the shackles with a boundary, but that respite did not last long. Sandeep got the better of him as well. The onus of encountering disciplined bowling was on the stand-in captain Karun Nair and Shreyas Iyer. Though Karun has not exhibited a characteristic innings yet, Iyer scored a resolute 47 in the previous match. That, or anything, did not change the course of the match. Sandeep struck again. He took a brilliant catch of his own bowling. Shreyas, without getting to the pitch of the length delivery, induced a slight leading edge. Sandeep dove to his left and pouched a one-handed stunner. Karun soon joined his comrades in the dugout. Live cricket updates: KXIP vs DD, match 36

Glenn Maxwell, who already has picked up two wickets with his off-spinners, put the struggling opposition in further trouble. The Daredevils lost half their side 30 runs in 8 overs.

However, the remaining half scored more runs than the top and middle order, reaching 67 all-out. Varun Aaron, who was left out for the past few matches, took 2 for 3 in 2 overs.

If KXIP win, they will move to the fifth spot. All the same, they have finish off the chase as soon as possible to scale up their net run-rate. The Delhi Daredevils, on the other hand, will have to play out of their skin to pull off the unlikely. Why Cheteshwar Pujara says he does not watch IPL on TV 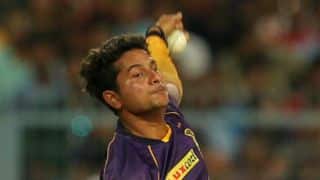