Sanju Samson became only the sixth player to score a hundred for Delhi Daredevils.

For a change, commentators did not mention the ball going into orbit, for there was some delightful strokeplay on offer. No heaves, slogs, or scoops. Instead there were proper cricketing shots in Sanju Samson’s maiden century in T20 cricket. Playing in match 9 of Indian Premier League (IPL) 2017, Samson scored 102 off 63 against Rising Pune Supergiant. In the process, he became only the sixth player to score a hundred for Delhi Daredevils. Let alone that, he became the first centurion in the 10th edition of this high profile domestic T20 spectacle. All in all, Samson scored 8 fours and 5 sixes to reach the three-figure mark. Full Cricket Scorecard, Rising Pune Supergiant vs Delhi Daredevils, IPL 2017, Match 9

Before this innings, Samson had only 5 half-centuries in 53 matches. However, Samson thanked his mentor Rahul Dravid for instilling confidence in him ever since both played for Rajasthan Royals. Speaking after the end of first innings, Samson fell short of words when asked about the knock.

Samson was in no non-sense mood when he took the crease. He smashed consecutive boundaries off Deepak Chahar, followed by back-to-back boundaries off Ashoke Dinda. However, Samson raised the bar in the 18th over after being bogged down post batting powerplay. He took Dinda to cleaners scoring two sixes and a four.

To add icing on the top, Samson brought up his hundred with a six over the sight screen. 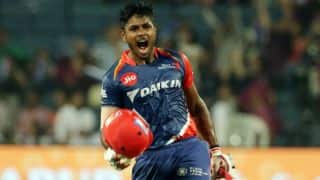