"Jaydev was amazing too with his final two overs to keep them down." - Steven Smith

Steven Smith-led Rising Pune Supergiant (RPS) stopped Mumbai Indians (MI) winning streak by beating them in match 28 by 3 runs at Wankhede Stadium. This was MI’s second defeat in the 10th edition of Indian Premier League (IPL). Interestingly, both have come against RPS. With this victory, RPS have moved to 4th spot in the points table. Chasing a stiff total of 161, MI failed to convert the results in their favour despite skipper Rohit Sharma’s fifty. After the match, Smith applauded his two main pacers Ben Stokes and Jaydev Unadkat for their impressive bowling in the death overs. FULL CRICKET SCORECARD: Mumbai Indians (MI) vs Rising Pune Supergiant (RPS), IPL 10 Match 28

“Absolutely happy. We scrapped really well at the end. Few guys under pressure did really well, Stokesy in the second last over was magnificent. Jaydev was amazing too with his final two overs to keep them down,” Smith said in the post match ceremony.

The RPS captain also said that the wicket was not like the usual Wankhede and their total was good enough to defend. ” It wasn’t a typical Wankhede wicket, took a bit of turn, stopped a bit and 160 was pretty much par. We know the arsenal Mumbai have with their batting”, added the Australian.

Applauding Unadkat, Smith expressed his views by quoting his bowling as fantastic one, especially towards the end. “Jaydev was fantastic at the end, he bowled wide with slower balls and hit hard lengths. If a batsman still hits you for a six you just take your hat off. He did really well to stick to his plans after Rohit hit him and came back well,” told Smith.

RPS ‘ next match is going to be against Kolkata Knight Riders (KKR) at their home Maharashtra Cricket Association Stadium, Pune. So far, RPS have not won a single match against KKR but would like to end their opposition s winning streak. 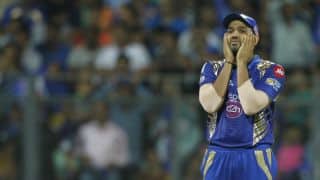