But little did everyone know that Sunil Narine would accompany his captain in match 11 of Indian Premier League (IPL) 2017, against Kings XI Punjab (KXIP).

Gautam Gambhir had asked Chris Lynn to open the innings with him against Gujarat Lions (GL). The strategy worked and Lynn scored an unbeaten 93 off 41, helping Kolkata Knight Riders (KKR) chase down a colossal 184-run target. However, after Lynn was rested due to a shoulder injury, everyone expected Robin Uthappa to open innings with Gambhir. It made sense, for the duo has won many a match for their franchise by stitching remarkable partnerships for the first wicket. But little did everyone know that Sunil Narine would accompany his captain in match 11 of Indian Premier League (IPL) 2017, against Kings XI Punjab (KXIP). Live Cricket Scorecard: Kolkata Knight Riders vs Kings XI Punjab, Match 11 at Eden Gardens

In hindsight, this was not the first time Narine batted at the top spot. Before that, the highest he had batted was at No. 5. All the same, Narine opened with Aaron Finch for Melbourne Renegades in Big Bash League 2016-17. Narine entertained everyone with a couple of fours and a staggering six. All in all, he scored 21 runs off just 13 balls. Finch and he added 38 runs together. Live cricket updates: KKR vs KXIP, match 10, IPL 2017

Gambhir must have done his homework. He knew Narine’s ability to use the long handle. Instead of promoting Uthappa, he asked Narine to open and go full throttle. Narine, when he took the crease, had no expression on his face (as did Gambhir). He took only two balls to score his first boundary. That, though, was not the highlight. Narine hit consecutive sixes and a four off Varun Aaron before he was dismissed for an 18-ball 37 off the same bowler who he reduced to rubble. 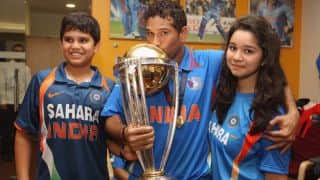