After being asked to bat first, Kings XI Punjab turned up smashing right from the word go, and stroked their way to a mammoth 230 for 3.

Wriddhiman Saha achieved the unique feat of carrying his bat as Kings XI Punjab (KXIP) turned up the heat on Mumbai Indians, by notching up the highest total of the ongoing Indian Premier League (IPL) 2017. After being asked to bat first, Kings XI Punjab turned up smashing right from the word go, and stroked their way to a mammoth 230 for 3 in their 20 overs, thus registering the highest total in the tournament towards the ending stages of the league round. Saha remained unbeaten on 93, whereas Martin Guptill (38), Glenn Maxwell (47) and Shaun Marsh (25) contributed with brisk knocks to help KXIP seize advantage in the clash. FULL CRICKET SCORECARD: Mumbai Indians (MI) vs Kings XI Punjab (KXIP), IPL 2017 Match 51

To say the least, Kings XI Punjab were off to a rollicking start. Kings XI Punjab need to win their remaining two matches to advance into the next round, and on Thursday night, they gave themselves the best shot of winning the contest against Mumbai Indians. The opening pair of Saha and Guptill came out all guns blazing, and took the Mumbai Indians by surprise. Guptill set the tone early on when he got two fours off the first two balls in the contest, and Saha ended the over with another four to make it 13 off the over. FULL CRICKET UPDATES: Mumbai Indians (MI) vs Kings XI Punjab (KXIP), IPL 2017 Match 51

KXIP continued with their attack as Mitchell McClenaghan was struck for three boundaries. Saha was on-song as he struck one past short third man, and also guided a full-toss which was adjudged a no-ball for height past the non-striker. Jasprit Bumrah came on in the third over and tried pulling things back in control for Mumbai, as he gave away a mere 3 runs off his first over.

Lasith Malinga made a horrendous start to the contest, as a front-foot no-ball was smacked for a six over cover by Guptill. The Kiwi batsman remained belligerent, getting two more fours off the Sri Lankan pacer, collecting 19 runs off his first 6 balls. Guptill hit 3 more fours before falling to Karn Sharma. He hammered 2 fours off the first 2 balls from the spinner, but ended up hitting the third ball straight to long-on. He fell for an 18-ball 36, studded with 5 fours and 1 six.

Guptill s dismissal had no impact on KXIP s run rate, as Glenn Maxwell strode out and Saha got more aggressive. In the next over, from McClenaghan, while Maxwell began with a four, Saha got two more fours to take KXIP to a strong position of 85 for 1 in 7 overs.

A short break had no impact on KXIP s approach, as the first ball from Karn was smashed for a six by Maxwell, and he ended the over with another, an inside-out shot over cover, to bring up 100 for his side. After 8 overs, KXIP were 100 for 1.

Harbhajan was brought on for the ninth over. Maxwell hammered the first ball for a six on the leg side and the second was hit towards midwicket again, with sheer power as the ball rammed into the advertisement board. There was another six hit by Maxwell before the over ended, as he brought up his 50-run stand off a mere 21 balls with Saha. Harbhajan leaked as many as 21 runs in his first over. In the first 9 overs, KXIP had raced to 121 for 1.

Mumbai Indians tried pulling things back in control with Malinga bowling a five-run 10th over and Bumrah maintained the pressure. Maxwell opened up the face of the bat very late on the penultimate ball of Bumrah s over to break the shackles, but he was cleaned up on the final ball for an excellent 21-ball 47. Maxwell clobbered 5 sixes and 2 fours.

Maxwell s dismissal did put a halt on the boundaries but KXIP moved along at a high rate. Saha danced down to hit a six and take Kings XI Punjab past 150, and Marsh joined in too by hitting the ball over deep midwicket.

Saha and Marsh added 52 runs for the third wicket in a little over 4 overs. While Saha remained as belligerent as he was earlier, Marsh did well to make a 16-ball 25 inclusive of 2 sixes.

Akshar Patel and Saha then joined forces to take Kings XI Punjab ahead, but the big hits were certainly missing. Saha and Akshar ended up with an unbeaten 47-run stand which came in a little less than 5 overs. Saha finished with 93 not out off 55 balls with 11 fours and 3 sixes, whereas Akshar scored 19 off 13 balls with 1 six.

On their part, Mumbai Indians made several errors. There were front-foot no-balls as well as a plenty of deliveries in the slot for batsmen like Guptill and Maxwell to pounce upon, and as as result, KXIP were off to a stunning start. Even towards the end of the innings, Mumbai Indians’ bowlers kept erring with their line and ended up leaving their batsmen with a huge task to climb a mountain. 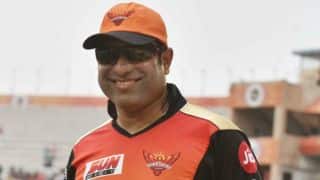 VVS Laxman to be honoured by MCC