With Yuvraj Singh around, you can always expect prank coming your way. This time he found his victim in his former national teammate VVS Laxman.

Defending Indian Premier League (IPL) champions Sunrisers Hyderabad (SRH) are a closely-knit unit. Through their social media updates, fans can figure out the camaraderie their cricketers share. The SRH camp has some of the finest and nicest names in the supporting staff as well. While Tom Moody is Head Coach, Hyderabad’s own VVS Laxman mentors the side and Muttiah Muralitharan is the bowling coach.

With Yuvraj Singh around, you can always expect prank coming your way. This time he found his victim in his former national teammate Laxman. The former Indian cricketer sat next to the Sri Lankan spin wizard in the flight back from Kolkata, and was caught snoring with headphones on. Yuvraj did not let go of the moment and let the world know by capturing it and posting the same on Instagram. ALSO READ: Watch Yuvraj Singh call Zaheer Khan laziest on field

Stylish, yet very different from one another, Yuvraj and Laxman have been a part of several happy Indian dressing rooms in the 2000s. While Laxman was one of the mainstays in Test cricket, Yuvraj’s prowess has been mostly restricted to limited-overs cricket. In January 2004, both were involved in a record 213-run fourth wicket stand in an ODI against the dominant Australia, in Sydney. While Laxman crafted 106 not out, Yuvraj blasted 139.

The David Warner-led SRH are defending champions. They got off to a good start in this edition with two back-to-back wins but consecutive losses against Mumbai Indians (MI) and Kolkata Knight Riders (KKR) respectively has seen them slip to the fourth spot in the points table. 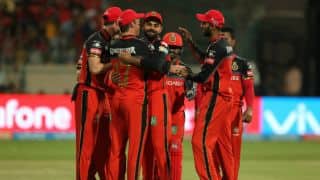