Yuzvendra Chahal produced a terrific spell of 4-0-16-3 to break the back of a high-flying Kolkata Knight Riders (KKR) against Royal Challengers Bangalore (RCB.

Royal Challengers Bangalore began with Samuel Badree in the first over, and his compatriot Narine hammered him for as many as 18 runs to set the tone. After being beaten on the first delivery, Narine thwacked the next three balls for boundaries, and hammered the fourth ball for a six over long-on. FULL CRICKET BLOG: Royal Challengers Bangalore (RCB) vs Kolkata Knight Riders (KKR), IPL 10, Match 27

Tymal Mills troubled Gautam Gambhir with a few quick bouncers, but as his luck would have it, the bowler was hit for a six when the KKR captain decided to have a go and hit the ball over the slip cordon in the second over.

Sreenath Aravind was summoned for the third over, and Gambhir got a boundary past the wide slip. On his part, Narine continued to have fun as he smacked the seamer for two more boundaries.

Before RCB had their first breakthrough, an elementary mistake cost them a wicket early in the fourth over. Gambhir had called for a second run but the bowler, Mills, was not backing up at the non-striker s when the throw came in from AB de Villiers. Had Mills been in the position, RCB would have celebrated a wicket a few balls earlier than they eventually did. Gambhir was caught behind for a 11-ball 14 on the fourth ball of the fourth over, with the umpires referring to the TV umpire for a correct decision.

Narine s innings finally ended when he pulled a short ball straight to Yuzvendra Chahal at deep square leg, thus missing out on a deserving half-century once again. However, Narine s fireworks did provide KKR the joint fastest fifty in IPL 2017. Narine fell for 17-ball 34, studded with 6 boundaries and 1 six.

RCB did extremely well to pull things back in control post the dismissal of Narine. Robin Uthappa was trapped leg-before in the next over by Badree when he tried playing against the line. Having lost 3 wickets in quick succession, KKR went into a shell and RCB denied them easy runs.

No boundaries were scored for two consecutive overs and when Yusuf Pathan decided to have a go, Chahal threw the ball down the leg, making it easy for Kedar Jadhav to break the stumps. Pathan fell for a run-a-ball 8.

Chahal continued to hurt KKR as he claimed the key wickets of Manish Pandey (15) and Colin de Grandhomme (0) to put RCB in firm control. From 48 for 1 in the fourth over, KKR had skidded to 93 for 6.

It was at this point when Chris Woakes and Suryakumar Yadav teamed up to stem the rot for KKR. Their approach against spinners was cautious, but Woakes did not shy away from hitting in the air towards cover. On his part, Suryakumar played a superb stroke when he got down on his knee to sweep a delivery from Aravind to beat the deep fine-leg.

Woakes and Suryakumar added 27 crucial runs for the seventh wicket, which took KKR past the 100-run mark. However, needing quick runs towards the end of the innings, KKR lost Woakes (18), Nathan Coulter-Nile (2) and Suryakumar (15) in quick succession. Pawan Negi dismissed Coulter-Nile and Suryakumar on two consecutive deliveries, but missed his hat-trick against Kuldeep Yadav.

The hosts, who started off in a splendid manner, were also bogged down by a raucous crowd at the Eden Gardens which turned up to support the visiting side consisting the likes of Kohli, Chris Gayle and AB de Villiers. 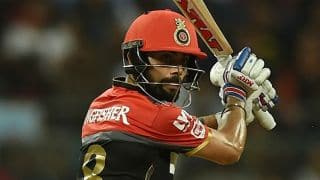