Mumbai Indians vs Rajasthan Royals Updates: Hello and welcome to CricketCountry’s coverage of the VIVO IPL 2018. We head to Match 47 where Mumbai host Royals at Wankhede Stadium, Mumbai. Barring table-toppers Sunrisers Hyderabad (SRH) — and already eliminated Delhi Daredevils (DD)  — other six teams are fighting hard to earn the remaining Playoffs’ spots. Amidst all this, Mumbaikars — Rohit Sharma and Ajinkya Rahane — will face-off at Mumbai with both sides having momentum in their grasp. MI and RR were languishing at the bottom, but have turned the tides and lit up the tournament with spectacular coming-from-behind victories.

RR have a realistic chance of pulling off an MI. The hosts are returning to their home turf on the back of 3 victories, while RR are getting into their elements. The heat may test players from both camps, but this is a night game. Nonetheless, 180-plus should be a par score. MI have home advantage, but both sides have form in their grasp. Expect a mouth-watering contest. Overall record favours MI (8-6).

MI and RR’s previous clash had gone down to the wire. RR had prevailed in a modest-scoring encounter. The situation has turned more intense for qualifications, and both teams will surely make up for another nerve-wrecking clash. 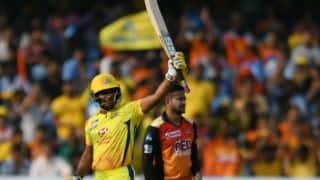