Royals have won more than 70 per cent of their matches at Jaipur. Head-to-head, it is even stevens at 4-4.

Match 28 of VIVO IPL 2018 will see Rajasthan Royals (RR) and Sunrisers Hyderabad (SRH) locking horns at Sawai Mansingh Stadium in Jaipur. The teams began their campaign by facing each other on the third day of the tournament where SRH posted an easy win. Since then they had a relatively good campaign and after the first half of the tournament, they have 5 wins from their 7 games.

In contrast, RR have had a mixed run winning 3 and losing as many. They did pull off a stunning win against Mumbai Indians (MI) on Sunday. Playing in Jaipur will be of great help but SRH have been the better side in this tournament.

All-rounder Krishnappa Gowtham’s brilliance against MI and Jofra Archer’s splendid bowling display brought them back in the tournament. They will expect skipper Ajinkya Rahane, Ben Stokes, Sanju Samson, Jos Buttler and Jaydev Unadkat to come good. They hold the key for RR’s success and the team banks on them.

Meanwhile, Sunrisers have been defending everything but their batting has just not clicked. Wriddhiman Saha has struggled. Shikhar Dhawan, after the good start, got injured and has been scratchy since. The side has relied too much on Kane Williamson. Manish Pandey, too, has done well in patches. The likes of Deepak Hooda and Yusuf Pathan add depth to their batting but they lack consistency.

Without Bhuvneshwar Kumar, SRH defended low totals consecutively. Bhuvi hit the nets at Jaipur and is expected to be available for the clash. He will come in place of Basil Thampi or Sandeep Sharma, both who have done exceptionally well. There is the guile of Shakib Al Hasan and Siddarth Kaul and Rashid Khan, SRH have a formidable attack.

SRH have played some very good cricket in the first half of the tournament and there is little doubt that they will start as favourites. Saha is due for a big one and it just might be his day.

Rahane and Williamson, the captains of the respective sides are very similar in nature. Soft spoken, nice guys and they are tagged better players of the longer format. Ice calm and great students of the game, both will hold the key for their sides, be it opening or leadership. 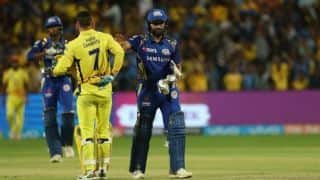