None of the MI batsmen could cross the 30-mark. Evin Lewis top-scored with a 17-ball 29, before falling in the final ball of the Powerplay.

Bhuvneshwar Kumar’s absence did not hamper Sunrisers Hyderabad’s (SRH) bowling plans as they restricted Mumbai Indians (MI) to 147 for 8 in their stipulated 20 overs in the Match 7 of the VIVO IPL 2018. Rashid Khan bowled 18 dot balls in his four overs to finish with 1 for 13. Rashid was well supported by Sandeep Sharma (2 for 25) and Siddarth Kaul (2 for 29).

None of the MI batsmen could cross the 30-mark. Evin Lewis top-scored with a 17-ball 29, before falling in the final ball of the Powerplay. Suryakumar Yadav consumed 31 balls but could manage just 28. His struggles were ended by Sandeep Sharma in the penultimate over.

Kane Williamson of SRH won the toss and elected to bowl. Sandeep Sharma, replacing the big shoes of injured Bhuvneshwar Kumar, started with squaring up Rohit Sharma in the first ball. Later in the over, Rohit miscued a pull but Deepak Hooda dropped the chance. Rohit capitalised on the life by smacking Billy Stanlake for a six and four next over but failed to keep a flick down as Shakib Al Hasan completed a sharp catch at square-leg.

Lewis and Ishan Kishan opened up and piled up 32 off the next 2 overs. Kishan was dropped by Sandeep. Rashid brought a break in the scoring with his only over in the Poweplay before Siddarth Kaul dismissed Kishan and the dangerous looking Lewis in the last over before the Powerplay.

Just when Krunal Pandya looked to open up, Shakib got the better of him. Rashid bowled as many as 10 dots in his first two overs. There was a little contest between the Afghan leg-spinner and Kieron Pollard. After a brief spell of dots, Pollard managed a four. Pollard was beginning to look threatening, he fell in a bizarre fashion to Stanlake. The Australian fired it at 143 kph but the ball stuck on the surface, Pollard was early on to the shot and found Shikhar Dhawan at sweeper cover.

Suryakumar struggled to keep up with the game’s pace at one end and he was joined by former SRH star Ben Cutting but the struggles did not end.

MI are without Hardik Pandya and their bowlers will really have to step up in order to restrict SRH’s power-packed batting. 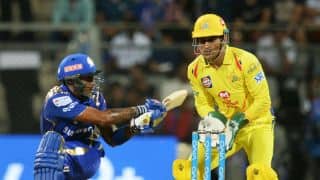 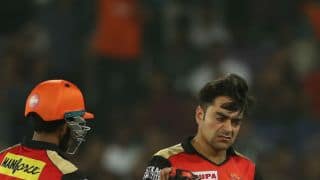