While the cricket has been of top notch in IPL 2018, umpiring decisions haven t been up to the mark.

While the cricket in IPL 2018 has been of top notch in IPL 2018, umpiring decisions haven t been up to the mark. A blunder from umpire KN Ananthapadmanabhan left Kolkata Knight Riders (KKR) cricketers and fans fuming during the Match 41 of the tournament. Mumbai Indians (MI) were blazing all guns and looked set for a huge score. Tom Curran was bowling the 16th over. Ananthapadmanabhan called the fifth ball a no-ball. Curran looked surprised and the replays showed that a part of Curran s foot was behind the line. A free-hit had already been signalled, leaving the KKR players justifiably upset. Curran even suggested a review, but unfortunately there is no such provision in the game. The umpires asked to carry on with the play but Curran still protested.

Curran calmed down only after skipper Dinesh Karthik intervened and asked him to carry on with the game. The free-hit ball was a full toss and luckily for KKR, it cost the team a single. The commentators criticised the call and fans lambasted the umpiring on social media.

Mumbai finished with 210 for 6 courtesy Ishan Kishan s 21-ball 62 that proved to be decisive. 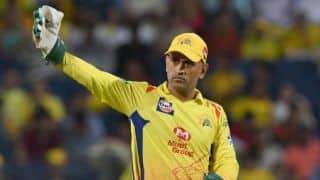 MS Dhoni reveals the name of his first crush