It took them 12 long years, but Punjab managed to breach the fortress of the Sawai Mansingh stadium after Rajasthan imploded in their chase. Jos Buttler‘s belligerent big-hitting seemed to trump Chris Gayle‘s sparkling half-century to help Rajasthan gun down a target of 185. But Punjab’s strong comeback, triggered by their captain R Ashwin‘s controversial dismissal of Buttler, kept Rajasthan 14 short of the target with the home team losing nine wickets for 56 runs. (READ: Match Highlights)

The mood of the evening was set up by Gayle, who for the second time in two years, began the season in scintillating fashion with a half-century, muscling Punjab to a strong total, but what unfolded in the first half of the second innings was a pure exhibition of clean hitting as Buttler used his bag of tricks to knock off the first 64 runs inside the Powerplay. The breakthrough finally arrived when Ashwin cleaned up his counterpart Ajinkya Rahane for 27, 14 off which the batsman scored the first over. (READ: Gayle quickest to 5000 runs)

Buttler and Sanju Samson never released their foot off the pedal, adding 70 runs for the second wicket. Buttler was in rampaging, form hitting everything in sight, en route to notching up his seventh half-century. Buttler’s big hits ensured Rajasthan scored at almost 10 an over at the half-way mark.

Buttler got inside Rajasthan’s skin, to an extent that it required Ashwin to go out of the way and mankad Buttler. In a moment that is bound to become one of the talking points of this edition, Ashwin paused and took off the bails with Buttler out of the crease, without issuing a warning. After a few heated words were exchanged between the Punjab captain and the batsman in question, an irate Buttler walked off after the big screen declared him out.

As Steve Smith walked out to bat, all eyes were on the former Australia captain. After an odd first five balls, two of which were free hits and off which the batsman played out dot balls, Smith hammered a length ball from Sam Curran towards mid-wicket for his first boundary upon return and followed it with an astonishing flick for six.

But overall, Smith looked slightly rusty. He survived back-to-back appeals off Curran in the 17th over a caught behind and an LBW before the England allrounder finally had his man, out caught to a stunning catch from KL Rahul at long-off. With Smith’s dismissal, the wheels came off for Rajasthan. Samson perished two balls later and Mujeeb Ur Rahman took out Ben Stokes after a six off the first ball. And when Rahul Tripathi holed out in the deep, Rajasthan, from 150 for 2, slumped to 158 for 5.

After Rajasthan captain Rahane won the toss and opted to field, Gayle forged crucial partnerships 56 with Mayank Agarwal for the second wicket and another 84 with Sarfaraz Khan. Lately, the structure to Gayle s batting has been to see off a period of calm before bringing out the storm. And tonight was no different. From 34 off 29, Gayle took one over to change the course of the innings drastically. The man in the firing line was Jaydev Unadkat, who variations weren t to flummox Gayle. The West Indies batsman took 19 off his over the 12th of the innings including three consecutive boundaries and a six to bring up his half-century.

Stokes tried to bowl length ball and the fuller delivery, but Gayle spared neither. The 16th over fetched read: 6, 4, 4, Wide, and 4. But the fifth delivery sent him back, though not before he had crunched a short delivery to find Tripathi at deep midwicket. He eventually departed for a 47-ball 79, celebrating the game in which Gayle became the fastest to 4000 runs in the Indian T20 League.

Gayle did the sensible thing to see off the new ball, especially after Dhawal Kulkarni had removed Rahul fourth ball of the innings. Rahul began with a crisp cover drive for a boundary before Kulkarni got his man out caught behind the fourth time in six innings that he d had Rahul s number. Agarwal began with flair, smoking Krishnappa Gowtham and Unadkat over the rope to near identical strokes before Gowtham, his Karnataka teammate had him out caught in the deep.

In the two overs after which Gayle departed, runs became hard to come by. Jofra Archer and Shreyas Gopal gave just conceded just 10 runs combined in the 17th and 18th over before Sarfraz and Nicholas Pooran stuck a couple of boundaries each to reclaim momentum. And even though the West Indies wicketkeeper batsman departed off the first ball, Sarfraz struck a four and a final-ball six to finish the innings with a flourish. 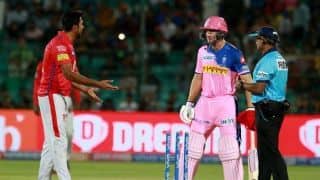