Rajasthan Royals (RR) were hoping to beat Delhi Capitals (DC) and keep alive their hopes to make it to the IPL 2019 playoffs alive. However, the visiting team’s batting once again came a cropper and dashed those hopes.

Here are the talking points from the DC versus RR match at the Feroz Shah Kotla:

“The wicket looks dry, not sure how it will play, might get slower and slower, will look to put the runs on the board,” RR skipper Ajinkya Rahane had said after electing to bat. His worry turned out to be true as Ishant Sharma and Amit Mishra ran through the RR batting line-up. While Ishant went for 38 runs in his four overs, he scalped three wickets in the powerplay and played a pivotal role in pushing RR on the backfoot.

Having lost as many as four wickets in the powerplay, it is not an easy task to stage a fightback. Mishra made it even more difficult. If Ishant troubled RR’s top order, it was Mishra who rattled the RR’s lower-middle and lower order. The leg-spinner scalped three wickets, dismissing Shreyas Gopal, Stuart Binny and Krishnappa Gowtham and dented whatever RR would have had to make a comeback into the match.

While all the other RR batsmen failed, Riyan Parag made sure his stock continues to rise. The right-hander walked in to bat in the sixth over and got out on the final delivery of the RR innings.

The 17-year-old scored 50 off 49 balls, hitting 4 fours and 2 sixes, and became the youngest to score his maiden half-century in IPL, surpassing Prithvi Shaw and Sanju Samson.

DC lost their openers – Shaw and Shikhar Dhawan – early in chase and the likes of skipper Shreyas Iyer and Colin Ingram too could not offer much with the bat as the leg-spinning duo of Ish Sodhi and Shreyas Goapl shared five wickets between themselves. However, the 116-run target was never beyond DC’s reach and they chased it down with 3.5 overs to spare, courtesy Rishabh Pant.

A few days back, DC head coach Ricky Ponting had hoped that Pant will single-handedly help his team win a few matches and the left-hander did his bit, playing on his home ground at the Feroz Shah Kotla.

While DC could not execute their plans to chase down the total within 10 overs, Pant made sure that DC cross the finish line with five wickets in hand and move into the top two spots in the points table. 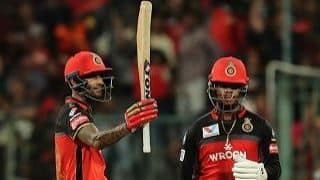