Delhi Capitals (DC) edged out Sunrisers Hyderabad (SRH) in a last-over thriller and made it to the Qualifier 2 after beating Kane Williamson-led unit by two wickets in the Eliminator of the Indian Premier League (IPL) 2019 at the Dr YS Rajasekhara Reddy ACA-VDCA Cricket Stadium in Visakhapatnam on Wednesday.

DC will now take on Chennai Super Kings (CSK) in Qualifier 2 and the winner of that game will then take on Mumbai Indians in the final.

Chasing 163, DC were off to a flying start as Prithvi Shaw cut loose. While Shilhar Dhawan set the tone, hitting two fours in the first over of the chase, it was the right-hander, who took on the SRH attack, especially their most experienced bowler, Bhuvneshwar Kumar. Shaw hit the Indian pacer for 17 runs in the fifth over as DC ended up scoring 55 runs in the powerplay.

However, Deepak Hooda struck in the eighth over and broke the opening partnership after Dhawan was out stumped. Shaw, meanwhile, brought up his fifty as DC moved to 83/1 after 10 overs. (IPL 2019, DC vs SRH: AS IT HAPPENED)

SRH then fought back, courtesy Khaleel Ahmed and Rashid Khan. The left-arm pacer struck twice in an over as he sent Shreyas Iyer and Shaw packing in the 11th over. While the DC skipper was caught by Saha, Shaw could not read the slower one and gave an easy catch to Vijay Shankar at point.

While Rishabh Pant and Colin Munro, who replaced Colin Ingram in the playing XI, hit a couple of big blows, Rashid pegged back DC with a two-wicket over. The leg-spinner, bowling his final over of the night, removed Munro and Axar Patel in the 15th over to tilt the game in SRH s favour.

However, Pant took apart Basil Thampi in the 17th over as DC scored 22 runs, with Pant hitting 2 fours and 2 sixes to bring down the target to 12 from 12 balls. But in his attempt to play a glory shot, after racing to 49 from 20 balls, the left-hander perished in the 19th over as SRH pushed the match into the final over, with DC needing 5 runs to secure a win.

While DC almost lost the plot as Amit Mishra was given out obstructing the field, Keemo Paul hit a four as DC sealed their place in Qualifier 2.

Earlier, after DC elected to bowl, Paul and Ishant Sharma shared five wickets between themselves and helped the team to restrict SRH to 162/8.

There was a drama straightway as Wriddhiman Saha survived an LBW call on the first delivery of the match, courtesy DRS. While Saha could not make most of the same and was dismissed by Ishant Sharma for eight, Martin Guptill was off to a flying start as SRH scored 54 runs in the powerplay, with the New Zealand batsman scoring 35 of them in 17 balls, with the help of 4 sixes and a four.

However, Amit Mishra struck in the first over after powerplay to end Guptill s blitz and gave DC their second breakthrough as Paul took a tumbling catch in the deep. With Guptill s wicket, DC pulled back the things as SRH could only score 17 runs in the four overs after powerplay.

While the duo of Kane Williamson and Manish Pandey added 34 runs together, they failed to score at brisk pace and the Indian batsman eventually perished for 30, going for a big shot as Paul scalped his first wicket of the night.

SRH, meanwhile, brought up their hundred in the 15th over. However, Ishant, who returned to attack to bowl his final over, struck for the second time of the night as he disturbed the timber to end Williamson s stay in the middle.

However, with Mohammad Nabi s arrival in the middle, SRH managed to up the pace as the Afghanistan allrounder and Vijay added 36 runs off 16 balls before the Indian allrounder got out after scoring a brisk 25 off 11 balls, hitting 2 fours and as many sixes. Nabi, meanwhile, got out in the final over after scoring 20 off 13 balls as SRH, despite Guptill s bright start and Nabi-Vijay’s quickfire knocks, were restricted to 162/8. 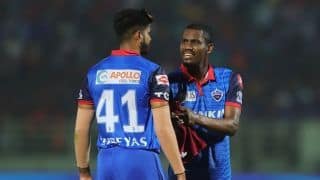 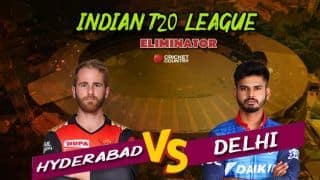