Kaul was candid enough to accept that it was a simple case of not being able to execute the plan he had in place for Russell. But not to get deterred by the turn of events, Kaul has promised to return stronger.

Hyderabad fast bowler Siddarth Kaul‘s bowling figures read 1/16 from three overs in the match against Kolkata before Andre Russell got stuck into him at the Eden Gardens on Sunday. The all-rounder picked 19 runs from the fast bowler’s last over as Kaul ended with figures of 1/35 from four overs. (ALSO READ: Williamson return in spotlight as Hyderabad aim to open account against Rajasthan)

Speaking to IANS, Kaul was candid enough to accept that it was a simple case of not being able to execute the plan he had in place for Russell. But not to get deterred by the turn of events, Kaul has promised to return stronger.

“There was no dew or anything. Execution was the problem to be honest and that is why the results didn’t come. But I am already working towards it and you will see the results in the next few games. You saw how (Jasprit) Bumrah was hit all over the park by (Rishabh) Pant in the game between Delhi and Mumbai.

Asked if he makes special plans when bowling to stars like Virat Kohli or Rohit Sharma, Kaul said: “We do get a feedback on all the players and their areas of strengths and weaknesses. I always try to keep these things in mind and just like I said, I try to execute my plans. I always look to work on my basics and come into the game strongly without focusing too much on the opposition batsmen.”

While everyone has been talking about the No.4 slot in India’s batting line-up for the World Cup, the fourth pacer’s slot is also up for grabs and the fast bowler said his focus was purely on the Indian T20 League and doing well for Hyderabad.

“If that does happen then that is a great thing as that can only act as a motivation. My job is to stay positive and keep working on the game. I also feel if I do the job and perform for my team in the IPL, the national selectors will obviously reward me. But I don’t look to focus on these things and I like to focus on my game,” he smiled.

With regular skipper Kane Williamson injured, Bhuvneshwar Kumar was elevated to the role of leading the side and Kaul said he loved the experience of playing under Bhuvi.

“He was already the leader of the bowling group and now it was fun to play under him. It always helps when a bowler is leading the team as that means you are understood even better when it comes to the strategising. Had fun playing under him and I am hoping he too, liked the experience of leading us,” he said.

If Williamson missed the game due to injury, David Warner returned to the league after missing the last season due to his suspension for his involvement in the Sandpaper Gate. And Kaul said it was great to have the batsman back in the squad.

“Warner is a champion player and it feels great to have him back in the team. Whatever happened is in the past and I think he showed that he was waiting to unleash himself on the ground. Having him around always helps as his experience helps us understand situations even better,” he said. 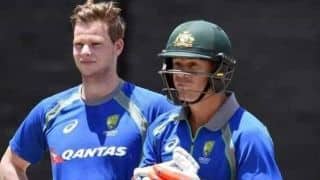