KKR are the worst hit in the lead-in to the 12th season of the Indian Premier League.

The past week has seen several cricketers ruled out of the 12th season of the Indian Premier League on account of injury, with a a couple others not fully fit before the start of the season.

Two-time IPL winners Kolkata Knight Riders have been the worst hit, with the India Under-19 pace duo of Kamlesh Nagarkoti and Shivam Mavi and South Africa quick Anrich Nortje all ruled out of the IPL.

Nagarkoti, who was bought by KKR for Rs 3.2 crore, was one of the major positives during India s title-winning U-19 World Cup last year. He is currently sidelined with a back injury which makes it successive IPL seasons that he won’t play for KKR. Mavi has been ruled out of the IPL season with a stress fracture in his back and is likely to be out of action for at least six months.

Nortje has a shoulder concern that has ruled him out of his maiden IPL season.

KKR start their campaign with a home game against Sunrisers Hyderabad on March 24.

Defending IPL champions Chennai Super Kings will be without South Africa fast bowler Lungi Ngidi who is out of the tournament due to a side strain suffered during the ODI series against Sri Lanka recently.

CSK open the IPL against Royal Challengers Bangalore at the MA Chidambaram Stadium in Chennai on March 23.

The allrounder Shakib Al Hasan has been granted a No Objection Certificate (NOC) by the Bangladesh Cricket Board to participate in the IPL, but the nature of his recovery is not ascertained yet. Shakib is sidelined with a finger injury sustained during the Bangladesh Premier League, and the BCB did not seek to risk playing him in New Zealand recently.

Shakib has been instructed by the BCB to manage his workload carefully with the World Cup in mind. He is a vital part of the Sunrisers Hyderabad setup and the franchise will hope he gets back to full fitness soon. SRH meet KKR on March 24 in their first match of IPL 2019. 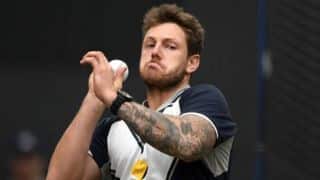