Shakib was ruled out of the three-match ODI series and the following first two Tests after sustaining a finger injury during the BPL final.

Bangladesh Cricket Board (BCB) President Nazmul Hasan has said that they are looking at giving allrounder Shakib Al Hasan proper rest and will not risk him for the New Zealand Test series.

Hasan maintained that Bangladesh are trying to get Shakib, who was ruled out of the three-match ODI series and the following first two Tests after sustaining a finger injury during the Bangladesh Premier League (BPL 2019) final, fully fit for the ICC World Cup 2019 in England. (ALSO READ: Mahmudullah demands better first innings performance from Bangladesh)

“I don’t think it’s absolutely necessary for him to play the third Test because the World Cup is coming up,” Nazmul told reporters.

“If he has a problem then we want him to recover fully before returning to cricket. We don’t want to take any risks with him.” (2nd Test: Rain washes away opening day’s play in Wellington)

Nazmul also said that Shakib, who plays for Kolkata Knight Riders in the Indian Premier League (IPL), will need a medical clearance to take part in the league which gets underway on March 23.

“If he is not fully okay then how will he play the IPL? It can’t be that he is only unfit for our national team but fit for the IPL. If he is fully okay and the doctors say so, then he will be able to play in the IPL,” he said.

“We want him to play in both the IPL and for the national team. The whole thing depends on his fitness,” Nazmul added.

Shakib began his rehabilitation on Thursday and according to the medical team, he will need an extra week s rest after reviewing the X-ray report. According to a BCB physician, Shakib will undergo another X-ray on March 12 which will decide his return. (ALSO READ: Shakib Al Hasan returns to training, still doubtful for third Test against New Zealand)

“He is improving quite rapidly. We will have another X-ray on March 12 and only then can we say something about his possible date of return. If we see the fracture is healed totally than he can start his batting,” the physician said.

“His main challenge is batting and fielding because though his pain has diminished substantially, still he is not fit to play shots all round the wicket,” he said.

Asked if he s trying to make a comeback in the last Test against New Zealand, Shakib said: “I am not sure because at the moment it is not possible to tell anything about the injury,” Shakib said. 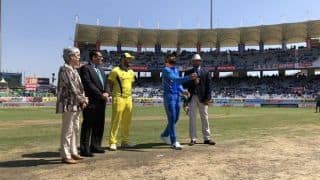