Mahmudullah reckons the tourist should let the match slip on the opening day itself.

Wellington: Bangladesh were humbled in the Test series opener against New Zealand by an innings and 52 runs and captain Mahmudullah has stressed on a better performance from his side in the first innings when both teams meet in the second match at the Basin Reserve in Wellington on Friday. (ALSO READ: Injury-hit Bangladesh ponder changes to counter ruthless New Zealand)

Mahmudullah reckons the tourist should let the match slip on the opening day itself. “I think last time the wicket was greenish early on and it was difficult for the batsmen on the first day because there was some movement and swing. Here, I feel that batting will get better as the game progresses, so the opening day is very important,” Mahmudullah told reporters on Thursday (March 7) ahead of the second Test. (ALSO READ: Bangladesh can expect bouncer barrage on flat Basin Reserve track: Trent Boult)

Bangladesh are sweating over several injury issues to their main players. Shakib Al Hasan and Taskin Ahmed have been ruled out of the Test series, while Mushfiqur Rahim still remains doubtful for Wellington. Adding insult to injury was fitness concerns of Tamim Iqbal, who slammed a century in the first match, but has complained of pain in the groin while fielding. “You cannot say anything regarding injury because it is part of game,” said Mahmudullah. (ALSO READ: Shakib Al Hasan returns to training, still doubtful for third Test against New Zealand)

“I am hopeful about Tamim. Even though he has a slight niggle, I believe he will be okay for tomorrow. I think he will be in good condition, he was comfortable with his batting and (should) play.”

“We are probably not getting Mushfiqur in the next match, but we are hopeful that he will be available for the last Test. He will have a proper net session and later we will know the exact condition of his pain is,” he said.

On the bright side, Bangladesh take confidence by the return of left-arm fast bowler Mustafizur Rahman, who is all set to return.

“The pace bowling attack is pretty inexperienced and it will hard for them if I expect a lot from them straight away. Certainly, they are good bowlers but we need to give them time as they groom they are going to be better for Bangladesh and they will perform better,” said Mahmudullah. (ALSO READ: Pitch in focus as New Zealand chase fifth straight series)

“They have that ambition and that was pleasing for me. I think they were pretty aggressive, and they bowled a lot of overs, they tried several things like bowling short balls and away from the batsmen or the length balls, but they needed to be more consistent,” he said.

“Mustafizur will come back but we are yet to decide who will have to make the way for him. 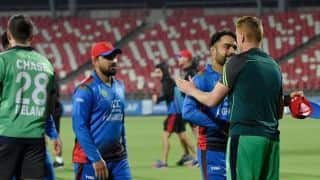