Up 1-0 in the three-match series, New Zealand are hopeful of victory over Bangladesh to put the result of the contest to rest.

The focus ahead of the second Test in Wellington is the nature of the Basin Reserve, where New Zealand will hope to clinch a fifth successive series win.

After an innings victory in Hamilton, in which a record total of 715/6 was achieved, New Zealand are back at the scene of a drawn Test match in December, in which Kusal Mendis and Angelo Mathews famously batted out the entire fourth day before rain came to Sri Lanka’s aid on the last day. Earlier in that match, New Zealand posted 578 with Tom Latham carrying his bat for 264.

After that draw, New Zealand s coach Gary Stead called for better surfaces in the country and the hosts are hopeful for a bit more assistance, especially with rain predicted for the first two days. (READ: Bangladesh can expect bouncer barrage on flat Basin Reserve track: Trent Boult)

It was at the Basin Reserve in 2017 that Bangladesh made 595/8 and lost the Test by seven wickets. They are in all likelihood without Mushfiqur Rahim, which weakens the batting. Tamim Iqbal needed support in the first innings at Seddon Park, and in the second innings it was Soumya Sarkar and skipper Mahmudullah who stood up with centuries. But as Neil Wagner expertly proved, a few well-directed bouncers can unravel Bangladesh.

Stead has confirmed that the legspinner Todd Astle will keep his place.

Bangladesh lacked bite with the ball in Hamilton, where the offspinner Mehidy Hasan Miraz bowled the most expensive spell in the team’s Test history. Khaled Ahmed went wicketless while conceding 149 runs and looks set to be dropped as Mustafizur Rahman returns. The coach Steve Rhodes said in Hamilton that Bangladesh were reluctant to play Mustafizur in back-to-back Tests, and that they were saving him for Wellington.

Mushfiqur batted in the nets on Wednesday but is unlikely to return from injury.

Whoever wins the toss will want to bowl first, because at the Basin Reserve the first session is when fast bowlers get assistance before the pitch flattens out into a batting paradise. The current strip has a bit more grass cover than the one in December, which will aid both teams’ pacers. Rain is forecast for Friday morning and scatter showers on Saturday before the weather improves.

Before the draw in December, the previous four Tests in Wellington were won by the team bowling first.

Mehidy’s analysis of 49-2-246-2 in Hamilton is the costliest in a Test innings for Bangladesh.

Latham averages 203.67 from his last four innings, which is the highest for a New Zealand batsman in a home season.

“Certainly this surface will offer a bit more and I’m sure if they [Bangladesh] bowl the same way they’ll get more opportunities.” – Latham 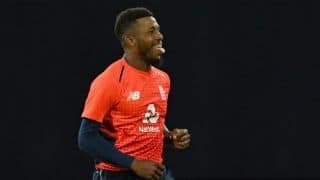