Bairstow and I complement each other really well: Warner

Bairstow and I complement each other really well: Warner

A big reason behind Sunrisers Hyderabad‘s success in IPL this year is the form of their openers David Warner and Jonny Bairstow. While partnerships are mostly about balancing the act, in the case of these two, both like to take the attack to the bowlers and there is no story of one looking to play second fiddle to the other.

Against Chennai Super Kings on Wednesday it was the same story as Warner hit a 25-ball 50 and Bairstow was unbeaten on 61 off 44 balls.

Speaking at the end of the game, Man of the Match Warner thanked the support that he has received from his Indian fans, even though he did mention the support he could see for MS Dhoni.

“Great support, even though there is plenty of yellow they are a fantastic crowd. Some times in our chases we have been a bit hesitant and that’s why I tried to bat 20 overs. Against the Kings I thought the wicket was a bit tough. Credit to Jonny, we complement each other really well. I have two beautiful children, one more on the way, and a beautiful wife and I can’t thank them enough. I have fantastic support from over the world and it has been overwhelming here in India,” he smiled.

Talking about the partnership, Bairstow said: “Was very pleased to be there till the end. Someone from the top four needed to be there and I am really happy I was the one. I think it’s handy to have a right hand – left hand combination. We (Warner and himself) complement each other really well. I think we got a very good team. Today our bowlers did well to restrict them in the last 11 or 12 overs, they’re improving in every game. It’s a pleasure to play here, in front of these fans with the Orange Army behind us. We were a bit ruthless today. It’s a pleasure to keep against (Rashid Khan). It’s also challenging to face him in the nets.” Delhi Capitals vs Mumbai Indians, IPL 2019, LIVE streaming: Teams, time in IST and where to watch on TV and online in India 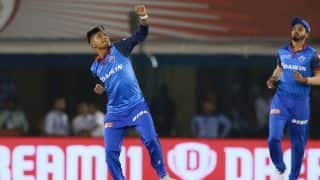