In the four matches that Morris has played for Delhi Capitals this season, he has taken six wickets with an economy of 7.93.

A convincing four-wicket win against a struggling Royal Challengers Bangalore (RCB) on Sunday gave Delhi Capitals (DC) much needed boost ahead of their next Indian Premier League (IPL 2019) match against the Kolkata Knight Riders (KKR) at the Eden Gardens on Friday. The win meant that the side have now won three matches out of the six that they have played this season, losing the other three. (WATCH: Iyer, Rabada hand RCB their sixth straight loss)

Allrounder Chris Morris believes that the win in Bengaluru has raised the spirits in the camp, and the team is looking forward to the challenge of performing at Eden Gardens.

“It was a very pleasing performance from the boys yesterday. To go out and win against RCB was something the boys were preparing well towards. The performance throughout the whole game was great, and even though there was a slight hiccup towards the end, in our batting, it was very pleasing to register the win. I feel that our bowlers have been executing their plans pretty well and this win has surely brought back the confidence among the group,” the South Africa said. (ALSO READ: Player of the Week – Kagiso Rabada)

In the four matches that Morris has played for Delhi Capitals this season, he has taken six wickets with an economy of 7.93. He has also bowled a total of 36 dot balls, which is only bettered by four other overseas players – Rashid Khan, Jofra Archer, Kagiso Rabada and Imran Tahir.

“I think all the bowlers have been doing their respective jobs very well. I know that I have the responsibility of delivering for the team, especially in the middle overs and towards the end. You will always face tough times during a long tournament like this, but having confidence in your own abilities is something that helps you get through that phase and come out on top.” (ALSO READ: Kolkata Knight Riders jump to top, Delhi Capitals switch places with Kings XI Punjab)

Looking forward to the next match against Kolkata Knight Riders, Morris said: “KKR are playing some amazing cricket. They have some great match winners in their team, players with X-factor. We’ve got a few days in between to rest and recover, and to get our bodies strong and fresh. We will of course go back to the drawing board and see what went wrong in the last match against them in Delhi which went to the Super Over.

“We will look to improve on those areas and make sure we are ready. Eden Gardens is a tough place to play for the visiting side, but as a team and as a unit, we look forward to the challenge and hopefully we can pull off a win here on Friday,” he said. 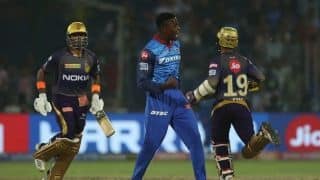 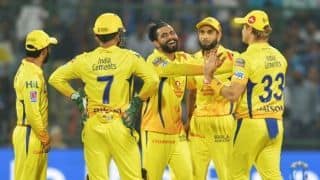