The Indian Premier League (IPL 2019) is into its third week and it s time to pick the Player of the Week. There was no stopping Andre Russell, who just seems to be raising the bar every game. The big Jamaican allrounder bludgeoned a whirlwind 48* off just 13 deliveries to turn the tables against Royal Challengers Bangalore (RCB) as Kolkata Knight Riders cantered to a five-wicket victory on Friday. (FULL POINTS TABLE)

But there was also a fast bowler, who was the star of Delhi Capitals in the only Super Over so far, ironically against KKR Kagiso Rabada besides defending those 11 runs last Saturday, the South African has picked 7 wickets this week in three matches.

Accuracy, hostility and raw pace, Rabada s eureka moment this edition would have probably been when he yorked Russell in the Super Over, but to top his performance, the 23-year-old pace gun grabbed a career-best 4/21 as he tore apart RCB s famed batting line-up in Delhi s four-wicket win, which also included the prized wickets of Virat Kohli and AB de Villiers.

Against RCB, Rabada pocketed three wickets in the 18th over of the first innings to restrict Bangalore to a total of 149. Against his South African team-mate De Villiers, he dismissed him with a slower length ball, while Kohli was undone by one stopping on him a touch and was holed out while looking to go over long-on

In Delhi s match against Sunrisers Hyderabad (SRH) on Thursday, the bowlers had not much to defend after the visitors restricted the Capitals to 129/8. With the form David Warner and Jonny Bairstow are in, a 130-run target would have been child s play, but Rabada made the run-chase tough for last year s finalists. (ALSO READ: ‘Rabada’s yorker to Russell will be ball of the IPL’)

Warner went after a fuller length delivery which was attacking the stumps but mistimed it and ended up getting picked by Chris Morris at mid-off. Bairstow though anchored the innings as SRH won by five wickets.

In the first match of the week against Kings XI Punjab on Monday, Rabada scalped two for 32, but it was not meant to be his day as Delhi fell 14 runs short, courtesy Sam Curran s four wickets.

Rabada, who missed the 2018 edition owing to an injury, has been averaging 15.90 and a good economy of 7.55. Considering the T20 format, he has been striking every 13th ball and with such a strike, his potent bowling should augur in the rechristened Delhi side in search of a strike bowler. 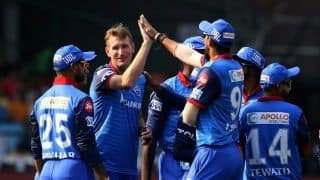