Hardik Pandya scored 91 off 34 balls but it was too little too late as MI suffered a defeat at the Eden Gardens.

Two wickets, two catches and an unbeaten 40-ball 80-run innings, Andre Russell put up a show to remember as Kolkata Knight Riders (KKR) ended their six-match losing streak with a 34-run win over Mumbai Indians (MI) in the 47th match of the Indian Premier League (IPL) 2019 at the Eden Gardens in Kolkata on Sunday.

While Hardik Pandya scored the fastest fifty of the season and went on to score 91 in just 34 balls, it was too little too late as MI had not a had a platform from where Pandya s knock could have powered them to a win.

Chasing a mammoth 233-run target, MI lost too many wickets too soon and it meant Pandya s blitz went in vain. With none from the top four- Rohit Sharma, Quinton de Kock, Suryakumar Yadav and Evin Lewis – setting up a platform, Pandya, despite hitting as many as nine sixes and six fours, was left with too much to do.

Earlier, KKR, after put in to bat, made a statement of sorts as they hammered 232/2. Shubman Gill and Chris Lynn, who opened the innings, set the stage on fire from the first ball. The Indo-Australian took apart MI bowlers and scored 96 runs in under 10 overs before Lynn got out for 54 off Rahul Chahar s bowling. The right-hander hit 8 fours and 2 sixes in his 29-ball stay in the middle. (ALSO READ: Top five team totals in IPL 2019)

Russell, who had been vocal in his criticism towards the decision-making and demanded a promotion in the batting order, then joined Gill in the middle as the two continued to score at brisk pace and added 62 runs for the second wicket in 35 balls.

While Lynn was severe on the MI bowlers, Gill too tormented the visitors and went on to score his second fifty of the season, before being dismissed by Hardik Pandya in the 16th over. The youngster, who hit 6 fours and 4 sixes, scored 76 in just 45 balls. (ALSO READ: Russell, Gill, Lynn power Kolkata Knight Riders to 232/2 against Mumbai Indians)

Russell and skipper Dinesh Karthik, who joined hands after Gill s fall, made sure that the openers solid show did not go in vain. While the West Indian brought up his eighth IPL half-century and remained unbeaten on 80 off 40 balls, Karthik made the most of all the opportunities he had, scoring 15 off 7 balls. 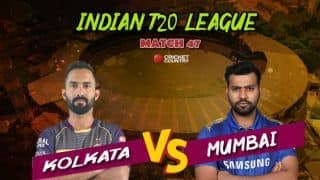 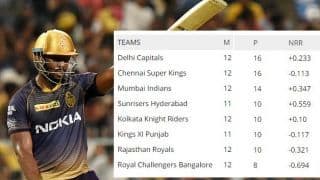