Quinton de Kock scored 60 off 39 balls and crossed the 1000-run mark in the cash-rich league.

Rohit Sharma, Mumbai skipper, at the toss had said that his side would have batted first if they had won the toss. The Indian team s vice-captain in the limited-overs cricket seemed in a mood to justify his thoughts as he attacked the Punjab bowlers as Mumbai reached fifty in five over, with Rohit scoring 32 of those runs.

However, Hardus Viljoen ended Rohit s innings after the Mumbai skipper was given out LBW. The replays showed that Rohit could have survived had he opted for a review as the ball was missing the leg stump.

Suryakumar Yadav was the next man to get out after he was trapped before the stumps by Murugan Ashwin, who replaced Varun Chakravarthy, to give Punjab their second wicket.

Quinton de Kock, who brought up his 1000 runs in the cash-rich league, meanwhile kept the scoreboard ticking as the South African wicketkeeper-batsman scored 60 off 39 balls and was involved in a 58-run stand with Yuvraj Singh.

However, the two perished in quick succession as Mohammed Shami dismissed de Kock and M Ashwin got Yuvraj out for 18. The duo of Kieron Pollard and Krunal Pandya failed to score big.

However, Hardik Pandya scored a quickfire 31 off 19 balls, hitting 3 fours and a six to take Mumbai to 176. 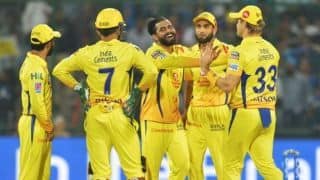