Delhi Capitals (DC) beat Royal Challengers Bangalore (RCB) by 16 runs in the 46th match of the Indian Premier League (IPL) 2019 at the Feroz Shah Kotla in New Delhi on Sunday and became the second team after Chennai Super Kings (CSK) to make it to the playoffs.

RCB, who were off to a flying start in the chase as Parthiv Patel went after DC bowlers, lost the plot in the middle-overs. While a lot was expected from the duo of Virat Kohli and AB de Villiers, the two failed to score big.

Earlier, overcame a mid-innings wobble and scored 187/5 after electing to bat at their home ground. While DC, riding on Shikhar Dhawan and Shreyas Iyer s fifties, looked in cruise control, the spin-bowling duo of Yuzvendra Chahal and Washington Sundar derailed the DC innings as the home team lost Dhawan, Rishabh Pant and Iyer in quick succession. Colin Ingram too fell for 11.

However, DC managed to stage a recovery as Sherfane Rutherford and Axar Patel scored 46 runs in the last three overs as Navdeep Saini, Umesh Yadav and Marcus Stoinis failed to contain the two left-handers. While the former scored an unbeaten 28 off 16 balls, Patel scored 16 off 9 balls.

20th over: Rabada to bowl the final over! Delhi Capitals have beaten Royal Challengers Bangalore by 16 runs and have sealed a place in the playoffs. RCB 171/7 (Stoinis 32, Umesh 0)

19th over: Ishant to bowl the penultimate over! 4 runs and a wicket! Ishant has made sure that RCB will have to pull off a heist in the final over. RCB 162/6 (Stoinis 24, Washington Sundar 1)

16th over: Lamichhane returns! Stoinis is opening his shoulder here. 10 runs off the over before the strategic time-out as the Australian hits a six. RCB 136/5 (Stoinis 17, Gurkeerat 10)

14th over: Axar into his final over! Just four runs off it. He must be happy with the way he has performed today. RCB 115/5 (Stoinis 2, Gurkeerat 5)

13th over: Mishra into his third over! RCB are losing the plot now. Klaasen departs for three and then Dube follows. RCB lose two wickets in an over and three in quick succession. DC are right back into this game. RCB 111/5 (Gurkeerat 3)

12th over: Rutherford into the attack! Stunning catch from Axar Patel. He can do no wrong today. Can he? Big wicket for DC as AB de Villiers gets out. RCB 107/3 (Dube 23, Klaasen 3)

7th over: Amit Mishra to bowl his first over! Good start from the leg-spinner as he concedes just three in his first over. RCB 67/1 (Kohli 23, de Villiers 3)

5th over: Ishant returns! Kohli was almost gone there but the ball bounced before landing in Pant’s gloves. RCB skipper survives and then adds insult to the injury, hitting Ishant for a six and a four. RCB cross the fifty-run mark. RCB 56/0 (Parthiv 35, Kohli 20)

4th over: Kagiso Rabada to bowl his first over! 10 runs off the over! Parthiv hits a four and then Kohli joins the party. RCB are off to a flying start! RCB 45/0 (Parthiv 35, Kohli 9)

3rd over: Sandeep Lamichhane into the attack! Parthiv is on a roll here. He is just tonking anyone who comes in to bowl. 15 runs off the third over as RCB move to 35 and Parthiv has scored 31 of those. RCB 35/0 (Parthiv 31, Kohli 4)

2nd over: Axar Patel from the other end! 10 runs from his first over as Parthiv hits a six. RCB will be happy with this start but will want to score at this pace for a while. RCB 20/0 (Parthiv 17, Kohli 3)

1st over: Ishant Sharma to start the proceedings! Parthiv Patel gets going straightway! 10 runs off the first over as the left-hander hits two fours. RCB 10/0 (Parthiv 9, Kohli 1)

While DC, riding on Shikhar Dhawan and Shreyas Iyer s fifties, looked in cruise control, the spin-bowling duo of Yuzvendra Chahal and Washington Sundar derailed the DC innings as the home team lost Dhawan, Rishabh Pant and Iyer in quick succession. Colin Ingram too fell for 11.

However, DC managed to stage a recovery as Sherfane Rutherford and Axar Patel scored 46 runs in the last three overs as Navdeep Saini, Umesh Yadav and Marcus Stoinis failed to contain the two left-handers. While the former scored an unbeaten 28 off 16 balls, Patel scored 16 off 9 balls.

20th over: Saini to bowl the final over! 20 runs off the over. DC have staged some recovery here as Navdeep Saini loses his line and length against Rutherford and Axar. The home team has scored 46 in the last three overs. DC 187/5 (Rutherford 28, Axar 16)

19th over: Umesh to bowl the penultimate over! 16 runs off the over as Axar and Rutherford take on the Indian pacer. Two fours and a six. DC doing their best to score as many as they can after the wobble. DC 167/5 (Rutherford 17, Axar 11)

16th over: Washington Sundar into his final over! Wicket in his final over. Have DC lost the plot here? The off-spinner dismisses Iyer. DC four down as RCB are pulling back the things. DC 131/4 (Ingram 1, Rutherford 2)

15th over: Chahal into his final over! Fifty for DC skipper Iyer and what a way to reach the landmark! He has taken on Chahal in his final over and hit him for two sixes. But RCB have managed to send Pant packing. He takes a review but it’s out. LBW. DC /3 (Iyer 51, Ingram 0)

13th over: Chahal returns! He strikes in his third over as Shikhar Dhawan departs immediately after bringing up his fifty. A much-needed wicket for RCB. Washington Sundar takes the catch. Just three runs from the over. DC 105/2 (Iyer 35, Pant 1)

12th over: Shivam Dube into the attack! Good start for the medium-pacer. Dhawan, meanwhile, has notched up another fifty, three in a row now for the left-hander, and DC have moved past 100-run mark. DC 102/1 (Dhawan 50, Iyer 33)

11th over: Change of ends for Stoinis! Dhawan, after having a couple of quiet overs, has hit a four as DC near hundred, with Dhawan closing in on his fifty. DC 97/1 (Dhawan 48, Iyer 30)

8th over: Marcus Stoinis to bowl his first over! Good start from the Australian. Just five runs from his first over. DC 74/1 (Dhawan 36, Iyer 19)

5th over: Navdeep Saini into the attack! Dhawan greets him with a six on the first ball. Iyer then hits him for four as DC score 11 runs from Saini’s first over to move past 50. DC 52/1 (Dhawan 24, Iyer 9)

4th over: Change of ends for Umesh! 11 runs off the over but RCB have got their first breakthrough as Shaw departs for 18 after edging one to Parthiv Patel. Umesh’s first of the evening. Iyer joins Dhawan now. DC 41/1 (Dhawan 17, Iyer 5)

2nd over: Washington Sundar from the other end! Shaw gets going as second over goes for 10 runs. The right-hander has hit two fours. DC 15/0 (Shaw 10, Dhawan 4)

1st over: Umesh Yadav to start the proceedings! Shikhar Dhawan is off the mark in style but overall a good start for RCB as only five runs are scored from the first over. DC 5/0 (Shaw 1, Dhawan 4)

Here’s what the captains – Iyer and Virat Kohli – said at the toss.

Virat Kohli: When you lose 6 in a row, the only thing you have in control is to enjoy pressure. Wherever the results take us, we are happy with that. Moeen’s gone, that’s a big miss. He’ll have a ball today. Klaasen comes into the side today. He’s waiting for his opportunity. Tim Southee misses out, Shivam Dube replaces him. Akshdeep is out, Gurkeerat replaces him.

Shreyas Iyer: We are gonna bat first. It’s a dry wicket. We are going really well. They have got nothing to lose. We have to back our strengths. The boys are motivated. Sandeep comes in place of Morris.

TEAM NEWS: DC have made one change to their playing XI as Sandeep Lamichhane replaces Chris Morris while RCB have made three changes. Heinrich Klaasen comes in place of Moeen Ali, who has returned to England for the national duties, Shivam Dube and Gurkeerat Singh Mann are in the team as Tim Southee and Akshdeep Nath miss out.

Pitch report: “The wicket is very, very dry. It’s like a riverbed, there’s hardly a blade of grass. Very uniform, very flat. Don’t expect a great deal for the seam bowlers. When the ball is new and shiny, it might skid off a bit. Once the shine is gone, this is gonna grip the wicket. Spin plays such a big part here at Kotla. Whoever wins the toss will will almost certainly bat first.”

Hello and welcome to our match coverage of Match 46 of IPL 2019 between Delhi Capitals and Royal Challengers Bangalore at the Eden Gardens on Sunday.

With Shikhar Dhawan scoring runs in a last few games, DC s batting looks in a good shape. Coming to their bowling attack, the focus will once again be on how the Purple Cap-holder Kagiso Rabada performs. 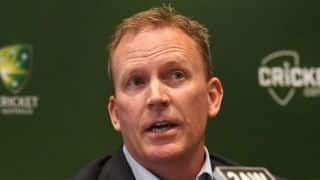 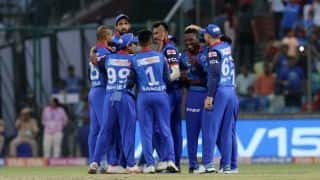